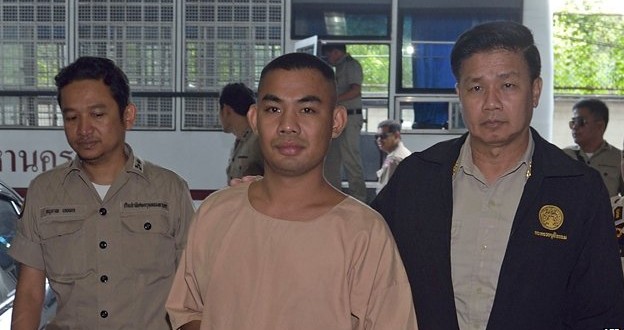 A Thai court has sentenced two students to two years and six months in jail for “damaging the monarchy”.

Patiwat Saraiyaem, 23, and Pornthip Munkong, 26, had pleaded guilty to breaking strict lese majeste laws which protect the royals from any insults.

The charges related to a play they performed at a university in 2013.

Thailand’s lese majeste laws are the world’s strictest, but critics say the military government is increasingly using them to silence dissent.

The play, called Wolf Bride, was set in a fantasy kingdom and featured a fictional king and his advisor.

However, the full details have not been widely reported because under the laws media coverage which repeat details of the offense is considered the same as the original statement.

The play marked the 40th anniversary of a student pro-democracy protest that was crushed by a military regime.

It was performed at Bangkok’s Thammasat University in October 2013, but the pair were not arrested until the following August.

Both students were denied bail, and have been held in custody since their arrest.

Human rights groups say there has been a rise in royal defamation cases since the military seized power in a coup in May last year.

The BBC’s Jonathan Head in Bangkok says 15 people have been charged with lese majeste since then.

More than 90 cases are being investigated and police are aiming to bring charges in about half of them, he adds.

Recent convictions include a taxi driver jailed for two-and-a-half years after his passenger recorded their conversation.

A student was also sentenced to the same amount of prison time for defaming the monarchy in a Facebook post.

The military has more widely suppressed dissent by detaining opponents, banning protests and censoring the media.

Thailand’s King Bhumibol Adulyadej, 87, is given an almost god-like status by many Thais. He has been on the throne for six decades, making him the world’s longest serving monarch.