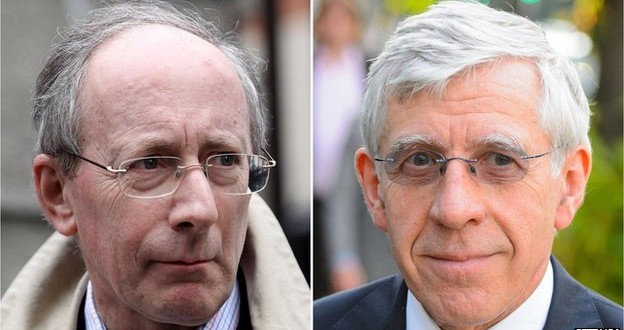 Two former foreign secretaries have been secretly filmed apparently offering their services to a private company for thousands of pounds.

Jack Straw and Sir Malcolm Rifkind are the subject of the allegations, arising from a joint investigation by the Daily Telegraph and Channel 4’s Dispatches.

The documentary makers said reporters posed as staff of a fake Chinese firm.

The MPs have referred themselves to the Parliamentary Commissioner for Standards. Both deny any wrongdoing.

It is claimed that Mr Straw was recorded describing how he operated “under the radar” and had used his influence to change EU rules on behalf of a firm which paid him £60,000 a year.

On the subject of payment, Mr Straw is heard saying: “So normally, if I’m doing a speech or something, it’s £5,000 a day, that’s what I charge.”

Sir Malcolm is reported to have claimed he could arrange “useful access” to every British ambassador in the world.

The Conservative MP for Kensington and chairman of Parliament’s Intelligence and Security Committee was recorded saying: “I am self-employed – so nobody pays me a salary. I have to earn my income.”

Jack Straw and Sir Malcolm Rifkind have both referred themselves to Parliament’s commissioner for standards. A full investigation could take months.

But there the similarities end.

Mr Straw has been suspended from the Parliamentary Labour Party at his own request. Ed Miliband is unlikely to feel much sympathy for the retiring MP.

Sir Malcolm is not facing any suspension.

He told me the allegations had no bearing on his very significant role as chairman of the parliamentary committee that oversees the work of MI5 and MI6.

Downing Street has not offered any view on that. A source said it is for the Commons and other members of that committee to decide.

Sir Malcolm told the BBC: “Channel 4 have confirmed in writing that I made clear that I would not assist any company to acquire information that was not already public.

“Trying to influence a decision or to receive privileged information would be improper.”

Asked if he thought the allegations had any bearing on his role as security committee chairman, he said: “None whatsoever.”

Mr Straw, who had already announced his intention to stand down as an MP in May, said he was “mortified” that he had fallen into the reporters’ “trap” but that he had said nothing “improper”.

“Since I ceased to be a minister in 2010, I have taken on a number of outside activities, including writing, speaking engagements, and one consultancy – with the long-established commodity suppliers, EDF Man (Holdings) Ltd,” he said.

“All of this has been undertaken fully in accordance with the MPs’ Code of Conduct.”

He said he had declined all other approaches to do consultancy work before May, but had considered “a number” of requests to work after that.

“The bogus company were told at the outset that any discussions with them were about what I might do once I left the Commons, not whilst I was still a serving MP,” he said.

Mr Straw has suspended himself from the Parliamentary Labour Party, and the party said it was aware of the “disturbing allegations” against him.

Sir Malcolm and Mr Straw both said they had requested copies of the recording transcripts, but that Channel 4 and the Telegraph had not provided them.

The undercover reporters had created a fictitious communications agency called PMR, which they said was based in Hong Kong.

A statement on Channel 4’s website said 12 MPs with “significant outside interests” were invited to apply for jobs with PMR, which had “plenty of money” and wanted to hire “influential British politicians to join its advisory board”.

“Not all politicians are for hire,” the statement added.

“Half of those approached didn’t respond. One said he wanted to check us out in Hong Kong so we took it no further. And another said he just wasn’t that interested. Of the others, two stood out – Sir Malcolm Rifkind and Jack Straw.”

The documentary, called Politicians for Hire, will be broadcast on Channel 4 at 20:00 GMT.