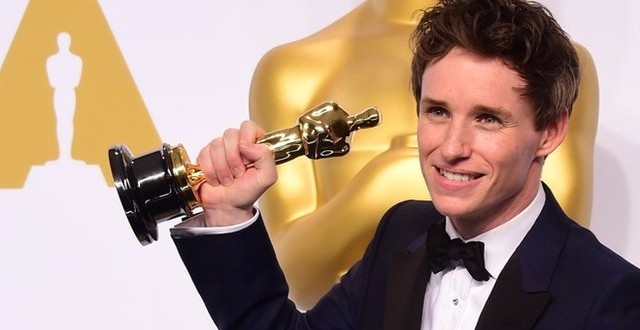 Highlights of the 2015 Academy Awards ceremony

British actor Eddie Redmayne has won the best actor Oscar for The Theory of Everything, while Julianne Moore picked up best actress for Still Alice.

The film sees Michael Keaton play a former movie superhero actor, who hopes to revive his washed-up career by putting on a Broadway play.

Redmayne paid tribute to the Hawking family in his speech

Moore shared her delight with journalists in the press room

Moore used her speech to raise awareness for Alzheimer’s disease – in Still Alice, she plays a 50-year-old who has early on-set Alzheimer’s.

“I’m so happy, I’m thrilled that we were able to shine a light on Alzheimer’s disease,” she said.

Redmayne was honoured for his portrayal of physicist Stephen Hawking, who has motor neurone disease (ALS).

Accepting his award, he thanked the Hawking family, including Jane Hawking on whose book the film is based, and said his award belonged “to all of the people around the world battling ALS”.

Arquette thanked “her Boyhood family” and “every woman who gave birth”.

“To every woman… we have fought for everybody else’s equal rights. It’s our time to have wage equality,” she added, to huge applause from the audience.

JK Simmons won best supporting actor for Whiplash, in which he played a strict drumming teacher at a music conservatory.

Hannon thanked absent actor Bill Murray – who has a cameo in the film – for introducing her to director Wes Anderson on the set of his film Rushmore 17 years earlier.

Legend used his time on stage to deliver a political message, saying: “We live in the most incarcerated country in the world… people are marching with our song… we are with you, march on.”

Emmanuel Lubezko’s win for best cinematography for Birdman was his second Oscar in as many years – in 2014, he won the same award for his work on Gravity.

Citizenfour, which chronicles one of the biggest intelligence leaks in American history, won best documentary feature.

It shows former National Security Agency contractor Edward Snowden at the very moment he made his sensational revelations detailing extensive internet and phone surveillance by the US government.

Best documentary short was won by Crisis Hotline: Veterans Press 1, about the counsellors who work with military veterans on a 24-hour phone helpline.

Performers at this year’s ceremony included Lady Gaga – who sang a medley of Sound of Music songs to celebrate the classic film’s 50th year – Jennifer Hudson and Anna Kendrick.

Host Neil Patrick Harris kicked off with a song which paid homage to Hollywood’s film industry, accompanied by Kendrick and Jack Black.

Birdman and Wes Anderson’s quirky comedy The Grand Budapest Hotel began the night with nine nominations each, while The Imitation Game had eight.

The best picture prize was widely predicted to either go to Birdman or Boyhood – both of which had been named best film at the many ceremonies leading up to Hollywood’s biggest night.

The directors of both films did their best on the red carpet to play down any rivalry with Alejandro Gonzalez Inarritu, who eventually won for Birdman, calling the supposed competition “so silly” and Linklater saying he loved Birdman.

“It’s a real tribute for two films that aren’t traditional stories, crazy stories,” said Linklater, who filmed the coming of age movie over 12 years with the same actors.