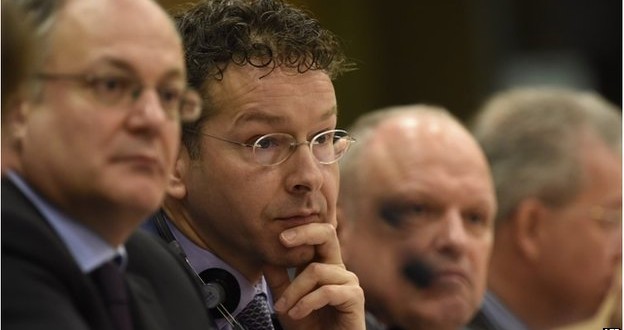 Eurozone finance ministers have approved reform proposals submitted by Greece as a condition for extending its bailout by four months, officials say.

The Eurogroup said it had agreed to begin national procedures – parliamentary votes in several states to give the deal final approval.

The measures offered by Greece include combating tax evasion and reforming the public sector.

But the head of the IMF said they lacked “clear assurances” in key areas.

The Eurogroup said in a statement: “We call on the Greek authorities to further develop and broaden the list of reform measures, based on the current arrangement, in close co-ordination with the institutions.”

The main stock market in Athens rose by nearly 10% on Tuesday afternoon, hitting a three-month high.

Greece’s debt currently stands at more than €320bn (£237bn), and its current €240bn bailout expires on Saturday. The stakes of talks over continued financial aid have been high because of fears of a Greek default that could push it out of the euro, triggering turmoil in the EU.

The European Commission and the European Central Bank (ECB) both stated that the Greek proposals were a “valid starting point”.

“It does not mean we approve those reforms, it means the approach is serious enough for further discussion,” he added.

“In some areas like combating tax evasion and corruption I am encouraged by what appears to be a stronger resolve on the part of the new authorities in Athens,” she wrote in a letter to the Eurogroup.

“In quite a few areas, however, including perhaps the most important ones, the letter is not conveying clear assurances that the government intends to undertake the reforms envisaged.”

The IMF, ECB and the Commission make up the “troika” of institutions that have managed financial rescue programmes for Greece since 2010.

The four-month bailout extension was agreed on Friday after several rounds of talks, pending Greece’s delivery of its reform proposals.

The deal was widely seen as a climbdown by Greek Prime Minister Alexis Tsipras. The newly elected leader of the left-wing Syriza party is trying to balance satisfying the demands of creditors with meeting his pre-election pledges.

His government wants to clamp down on tax evasion, corruption and inefficiency in order to fund social spending and alleviate what it calls Greece’s “humanitarian crisis”.

The government has rowed back on pledges to raise the minimum wage and rehire civil servants, but has persuaded the eurozone to allow it to spend some money to help the poor with health insurance and food handouts.

Some on the left of the governing party are opposed to what they see as a climbdown on pre-election promises. But many here are ready to accept a compromise, giving their government credit for actually negotiating rather than simply accepting the eurozone’s demands.

This is, in reality, a short-term fix for an economy in which public debt is unsustainable and growth negligible. And in four months’ time, Greece will be back at the top of the agenda as the eurozone attempts to work out a long-term strategy for its most debt-stricken member.

ECB head Mario Draghi noted that Greek commitments “differ from existing programme commitments in a number of areas”. He said there would be a need to assess whether measures rejected by Greece were “replaced with measures of equal or better quality”.

Eurogroup chairman Jeroen Dijsselbloem said the Greek government had a right to put its own “stamp” on the bailout programme.

“The new government is much more aggressive on taxes and corruption, and these are excellent things,” he told Dutch radio.

“But the Greek government is perhaps too optimistic about the speed with which they can boost tax revenues.”