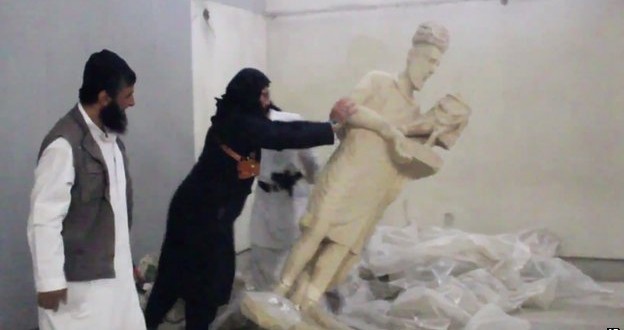 Militants used sledgehammers and drills to smash the statues

The Islamic State (IS) group has released a video showing the destruction of statues in Iraq.

The video shows statues being smashed using sledgehammers in what appears to be a museum in the city of Mosul.

Statues are also shown being destroyed reportedly at an archaeological site known as the Nergal Gate.

One of the militants in the video describes the artefacts as “false idols” and seeks to justify their destruction in religious terms.

In the video released via IS social media sites, black-clad men push over statues, smash them with sledgehammers and use a pneumatic drill to destroy the rubble.

The video shows a black-clad man drilling through and pulling apart what appears to be a stone winged-bull Assyrian protective deity that dates back to the 9th Century BC.

Analysts say the artefacts are unique and priceless although the museum does also house copies of some items.

IS have controlled Mosul, Iraq’s second largest city, since June 2014. The US military have said that an assault on the city by the Iraqi army could happen within months.

The region under IS control in Iraq has nearly 1,800 of Iraq’s 12,000 registered archaeological sites.

The reported destruction of the statues follows recent reports that IS burnt down Mosul Library, which housed over 8,000 ancient manuscripts.