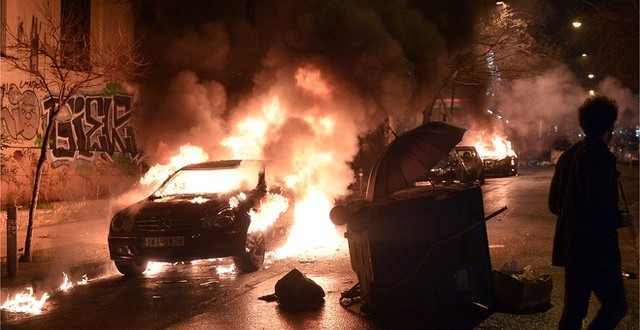 Greek violence ahead of debt vote

Dozens of activists hurled petrol bombs and stones at police and set cars alight after the march.

The unrest came ahead of a vote by the German parliament on Friday on whether to extend financial aid for Greece.

The deal, approved by Greece and international creditors last week, has triggered dissent within Syriza itself.

If ratified, the agreement will give Greece a four-month bailout extension in return for government reforms.

Prime Minister Alexis Tsipras has defended it, but some on the hard left have accused the government of going back on pre-election pledges.

Syriza swept to power in January by promising to renegotiate the country’s debt and end austerity.

About 450 far-left protesters took to the streets of Athens on Thursday to voice their anger.

After the march, about 50 demonstrators clashed with riot police. Shop windows and bus stops were also smashed.

Several shops were damaged during the disorder

Eurozone finance ministers on Tuesday approved a set of reform proposals submitted by Greece, but parliamentary votes in several countries is needed for final approval of the bailout extension.

As the dominant economic power in the EU, Germany’s approval is regarded as crucial.

On Thursday a clear majority of MPs from Chancellor Angela Merkel’s centre-right CDU/CSU bloc voted in favour of extending the €240bn (£176bn; $272bn) bailout for Greece – which is currently due to run out on 28 February.

Mrs Merkel’s grand coalition has a commanding majority in the Bundestag and the ballot suggests German backing for an extra four months is in no doubt.

Although German Finance Minister Wolfgang Schaeuble, has backed an extension and called for the parliamentary vote on Friday, he remains sceptical of the new Greek government’s reform efforts.

“The question is whether one can believe the Greek government’s assurances or not,” he reiterated in an interview with German radio on Thursday.

“There is a lot of doubt in Germany, that has to be understood. Only when we see that they have fulfilled [their promises] will any money be paid.”