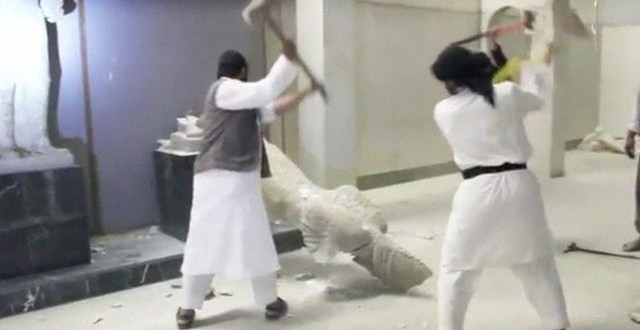 Professor Eleanor Robson, from University College London, says she has no doubt the “heartbreaking” statue destruction footage is genuine

The destruction of historic artefacts in Iraq by Islamic State (IS) militants is a war crime, the head of the UN agency for culture, Unesco, has said.

Irina Bokova said she was appalled by an act of “cultural cleansing”, calling for an emergency meeting of the UN Security Council to discuss the issue.

IS posted a video on Thursday appearing to show militants with sledgehammers smashing statues in a museum in Mosul.

Some of the artefacts date back to the 9th Century BC.

The militants said the statues were “false idols” that had to be smashed.

At a news conference in Paris, Ms Bokova described the video as “a real shock”, saying she was simply unable to finish watching the footage.

“I was filled with dismay by images of the attack on the Mosul Museum,” she said.

In a statement, Unesco stressed that under the Rome Statute of the International Criminal Court (ICC), the deliberate destruction of cultural heritage is a war crime.

The statement added that Ms Bokova had already called on the ICC to launch an investigation.

She also announced the creation of a “global coalition against the illegal trafficking of cultural goods”, adding that it would meet in coming weeks.

Meanwhile, the Louvre Museum in Paris said in a statement: “This destruction marks a new stage in the violence and horror, because all of humanity’s memory is being targeted in this region that was the cradle of civilisation, the written word, and history.”

In the video released via IS social media sites, black-clad men push over statues, smash them with sledgehammers and use a pneumatic drill to destroy the rubble.

The video shows one man drilling through and pulling apart what appears to be a stone winged-bull, an Assyrian protective deity dating to the 7th Century BC.

One of the militants in the video seeks to justify their destruction in religious terms.

Analysts say the artefacts are unique and priceless, although the museum does also house copies of some items.

IS have controlled Mosul, Iraq’s second largest city, since June 2014. The US military have said that an assault on the city by the Iraqi army could happen within months.

The region under IS control in Iraq has nearly 1,800 of Iraq’s 12,000 registered archaeological sites.

The reported destruction of the statues follows recent reports that IS burnt down Mosul Library, which housed over 8,000 ancient manuscripts.