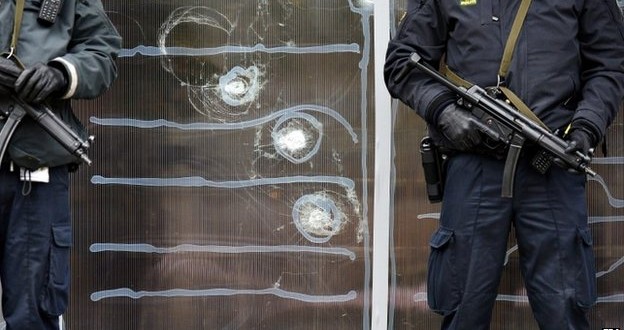 The gunman, Omar El-Hussein, attacked a free speech event and a synagogue

A third man suspected of helping a gunman who killed two people in Copenhagen earlier this month has been arrested, Danish police have said.

Police gave few details, but said the “young man” would face a custody hearing on Saturday.

Two other men were charged shortly after the attacks with helping the gunman, Omar El-Hussein.

El-Hussein was shot dead by police after targeting a free speech debate and a synagogue.

The shootings left a film director and a Jewish man dead and five police injured.

The two men charged earlier this month were accused of providing and disposing of the weapon used in the shootings, as well as with helping the gunman to hide.

Their custody was extended by four weeks on Thursday.

The latest man to be arrested is “charged with complicity in the perpetrator’s actions”, police said.

El-Hussein was known to Danish security services, but after the attack Prime Minister Helle Thorning-Schmidt said there was no indication he was part of a cell.

He was released from prison two weeks before the attacks after reportedly serving a two-year sentence for grievous bodily harm.