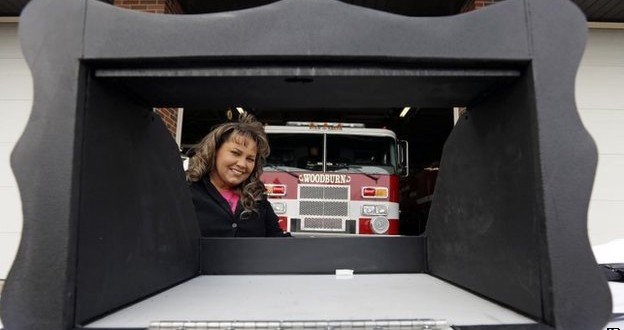 Monica Kelsey, a fire-fighter and medic, is an advocate for baby boxes in Indiana

Indiana could be the first US state to introduce baby boxes – anonymous drop-off points designed to prevent the deaths of abandoned infants.

Many states allow parents to hand over infants at public facilities, but the boxes have not been used in the US.

The boxes offer people who will not give up a child in person an alternative to abandonment or infanticide, proponents say.

But they have been criticised in Europe and Asia, where they are more common.

Elizabeth Throssell, a spokeswoman for United Nations Committee on the Rights of the Child, urges countries to provide family planning and other support to address the root causes of abandonments, like poverty, instead.

Other concerns over baby boxes include the need for medical care provided at safe haven sites like hospitals or police stations. The involvement of a trained professional at the point of handover can also help assess whether the mother simply needs financial support or other help.

Since 1999, a number of US states have passed “safe haven” laws that allow parents to surrender newborns at hospitals, police stations and other facilities without fear of prosecution, so long as the child hasn’t been harmed.

Republican politician Casey Cox, who authored the bill, says baby boxes are a natural progression of such laws. The Indiana House overwhelmingly passed the bill this week. It is now being considered by the state senate.

Baby boxes have been used in Europe and Asia

Supporters of the bill hope that about one hundred boxes could be deployed by July. According to Save the Abandoned Babies Foundation, nearly two-thirds of those illegally abandoned die.

Baby hatches are so popular in Asian countries in particular that they have even become the subject of a new documentary called “The Drop Box,” which follows the efforts of a pastor in Seoul, South Korea, to address child abandonment.

In China local authorities have been so overwhelmed by abandonments in recent years that they have restricted the use of the boxes or closed them entirely.