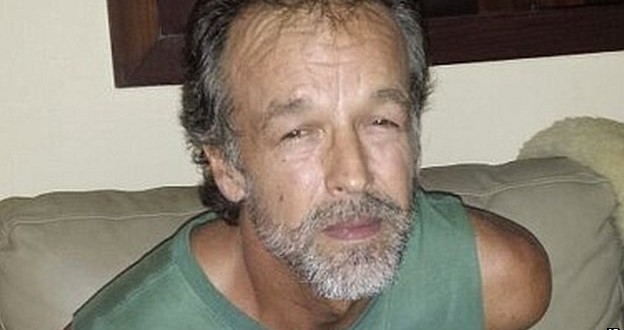 Victor Barnard is expected to be extradited to the US, where he faces 59 counts of sexual abuse

Police in Brazil have arrested an American man suspected of sexually assaulting young women while running a religious group in Minnesota.

Victor Barnard was detained on Friday after police raided a flat in the northeastern beach resort of Pipa.

The 53-year-old, who founded his River Road Fellowship sect in Minnesota, was the subject of an international manhunt after disappearing in 2010.

Mr Barnard is being held in the city of Natal, 80km (50 miles) north of Pipa, while he awaits extradition to face charges in the US.

According to a criminal complaint in the US, two women said they were among about 10 girls and young women who were targeted by Mr Barnard.

They were chosen to live apart from their families at a camp he set up near Finlayson, Minnesota, about 90 miles (150km) north of Minneapolis.

One of the women says she was sexually abused by Mr Barnard from the age of 13 until she was 22. The other said her abuse occurred between the ages of 12 and 20.

US authorities say he used religious coercion and intimidation to isolate and control them.

He allegedly told one victim she would remain a virgin because he was a “man of God”, according to a criminal complaint.

Most of the counts against him carry a maximum sentences of 30 years in prison.