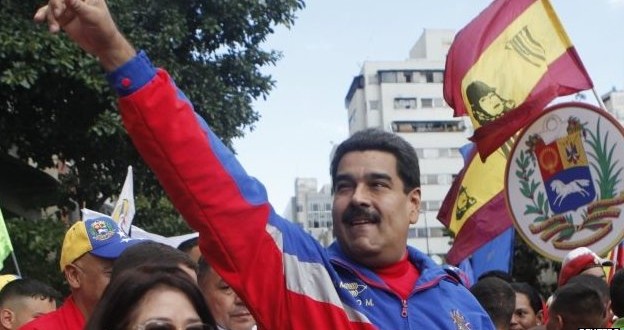 President Nicolas Maduro greets his supporters in a Caracas rally

Venezuela’s President Nicolas Maduro has announced measures to limit the number of US diplomats working in the country.

President Maduro said he wanted a review and reduction of American diplomatic staff.

US citizens visiting the country would also need visas and there would be a list of politicians who would be banned from entry.

Mr Maduro said US meddling had forced him to adopt the new measures.

The preisdent said that the US government had 100 employees working in Venezuela whereas Venezuela had 17 based in the US.

Mr Maduro said Venezuela would be charging Americans the same rates for visa as those levied on Venezuelans wishing to visit the United States.

Mr Maduro said these were all men who had violated human rights and encouraged terrorism, particularly in Iraq and Syria.

The move builds on sanctions imposed last year on Venezuelan officials alleged to have violated the rights of protesters during demonstrations that shook the country in the first six months of 2014.

The list of officials banned from entering the US was extended to include family members.

Earlier this month President Maduro accused the US of working with opposition groups to stage what he said was a coup that involved bombing the presidential palace.

Washington rejected the accusations as ludicrous.

The two countries have not exchanged ambassadors for the last five years.