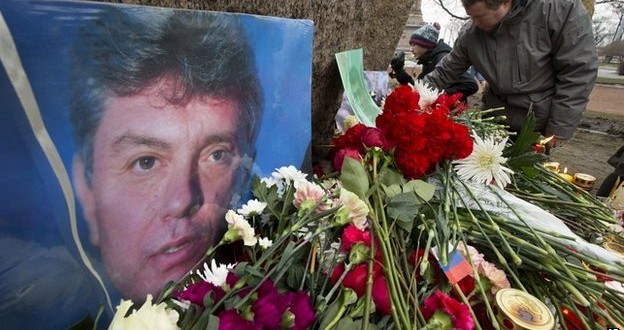 Nemtsov mourners to march in Moscow

Crowds of people are gathering in central Moscow to honour opposition politician Boris Nemtsov, who was shot dead on Friday.

He was due to lead an opposition march on Sunday but his supporters will now be marching to mourn his death.

Mr Nemtsov’s allies call it a political killing linked to his opposition to Mr Putin and the Ukraine conflict.

Opposition supporters are meeting at a point not far from the Kremlin, from where they will march to the spot on Great Moskvoretsky Bridge where Mr Nemtsov was killed.

Moscow city authorities had previously approved a march for up to 50,000 people but organisers said more people might now attend following the murder.

‘They won’t stop us’

As night fell on Saturday, flowers were piled up a metre high and two metres wide on the bridge.

Placards read: “We are all Nemtsov” and “Je Suis Boris” – the latter a reference to the Je Suis Charlie messages of support following the Charlie Hebdo killings in Paris in January.

There’s a very sombre mood here, as the crowd gathers to remember Boris Nemtsov. There’s still a deep sense of shock at his killing just beneath the Kremlin walls.

He had been planning a rare opposition rally today – against the policies of President Putin. Instead his friends and supporters have come out to mourn his death.

Mr Nemtsov’s friends are certain he died for daring to speak out against corruption, against Mr Putin’s increasingly authoritarian rule and against the conflict in Ukraine that Russia denies any role in. Boris Nemtsov called it President Putin’s “mad, aggressive war.”

But above all – there’s anger here, at the fervently nationalist mood that Mr Putin’s policies have created. One that’s fanned each day, by state television.

Russia has become a country where critics are labelled traitors. And now, one of the sharpest voices of dissent has been silenced.

Who was Boris Nemtsov?

One of those attending, Alexander Badiyev, said: “This was ordered by Putin, without a shadow of a doubt. They have shown us what the fate will be of all those who are against them.”

Mr Nemtsov called for “honest elections” hours before he was killed

Former UK ambassador to Russia, Sir Tony Brenton, told the BBC there was now “an atmosphere of political hysteria in Russia”.

“And that is an atmosphere which has generated a lot of really rather nasty right-wing ex-soldiers’ groups to come to the surface. And it is quite possible that it is a group like that that was responsible for Boris’s death.”

Russia’s Investigative Committee said it was looking into a number of possible motives, including Mr Nemtsov’s opposition to the Ukraine war, his political and personal life, Islamic extremism or an attempt to destabilise the state.

A number of pro-government figures suggested Mr Nemtsov had been made a sacrificial victim to show the state in a bad light.

Presidential spokesman Dmitry Peskov said Mr Putin had noted “that this cruel murder has all the makings of a contract hit and is extremely provocative”.

Others suggested there could have been personal enmity over his private or business life.

Mr Nemtsov was reportedly preparing documents on Russian military involvement in Ukraine in the weeks before his death.

Ukrainian President Petro Poroshenko said: “Boris had declared he would provide clear evidence of Russian armed forces’ participation in [the war] in Ukraine. Somebody was afraid of this… They killed him.”

Mr Nemtsov, 55, had been dining at a restaurant with his girlfriend Anna Duritskaya on Friday night.

They left together to walk to his flat, crossing the bridge, where a white car drew up and Mr Nemtsov was shot four times with a pistol at around 23:40 (20:40 GMT).

Footage on Russian TV showed a white Lada Priora car in the area but there was no confirmation it was the one involved. One shot showed someone running along the road and jumping into the waiting car, which sped off.

In a telegram to Mr Nemtsov’s mother, published on the Kremlin website, Mr Putin vowed to bring the killers to justice. He praised Mr Nemtsov’s openness and honesty.

Mr Nemtsov served as first deputy prime minister under President Boris Yeltsin in the 1990s but fell out of favour with Mr Putin and became an outspoken opponent.

Are you taking part in the march? You can email [email protected] with your comments. Please include a telephone number if you are willing to be contacted by a BBC journalist.