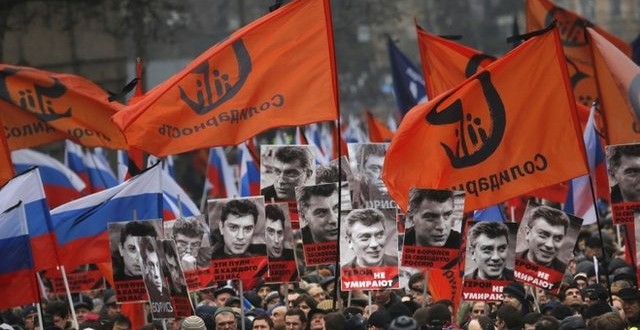 Mass rally for Nemtsov in Moscow

Sarah Rainsford reports as thousands gather on the streets of Moscow

Tens of thousands of people have marched through central Moscow to honour opposition politician Boris Nemtsov, who was shot dead on Friday.

They carried portraits of Mr Nemtsov and banners saying “I am not afraid”.

He had been due to lead an opposition march on Sunday but his killing turned the event into a mourning rally.

Mr Nemtsov’s allies have accused the Kremlin of involvement, but President Vladimir Putin condemned the murder as “vile” and vowed to find the killers.

Opposition supporters gathered at a point not far from the Kremlin before marching past the spot on Great Moskvoretsky Bridge where Mr Nemtsov was killed. Some chanted “Russia without Putin!”

Moscow city authorities had approved a march of up to 50,000 people there.

These placards read: “Heroes don’t die” and “These bullets are for each one of us”

There is a heavy police presence, including at the scene of the killing

Many people carried the national flag and flowers to lay at the scene of the killing, which is already piled high with tributes. A few were holding Ukrainian flags.

Some of the placards read “He died for the future of Russia” and “They were afraid of you, Boris”.

Opposition politician Ilya Yashin told Associated Press: “It is an act of terror. It is a political murder aimed at frightening the… part of the population that supported Nemtsov and did not agree with the government. I hope we won’t get scared.”

Another opposition figure, Gennady Gudkov, told Reuters: “If we can stop the campaign of hate that’s being directed at the opposition, then we have a chance to change Russia. If not, then we face the prospect of mass civil conflict.”

Pro-Kremlin activists from the group Anti-Maidan had said they would not disrupt the march.

There’s a very sombre mood here, as the crowd gathers to remember Boris Nemtsov. There’s still a deep sense of shock at his killing just beneath the Kremlin walls.

He had been planning a rare opposition rally today – against the policies of President Putin. Instead his friends and supporters have come out to mourn his death.

Mr Nemtsov’s friends are certain he died for daring to speak out against corruption, against Mr Putin’s increasingly authoritarian rule and against the conflict in Ukraine that Russia denies any role in. Boris Nemtsov called it President Putin’s “mad, aggressive war.”

But above all – there’s anger here, at the fervently nationalist mood that Mr Putin’s policies have created. One that’s fanned each day, by state television.

Russia has become a country where critics are labelled traitors. And now, one of the sharpest voices of dissent has been silenced.

Who was Boris Nemtsov?

Mr Nemtsov called for “honest elections” hours before he was killed

Russia’s Investigative Committee said it was looking into a number of possible motives for Mr Nemtsov’s murder.

They include his opposition to the Ukraine conflict, Islamic extremism – Mr Nemtsov was Jewish – and an opposition “sacrifice” of its leader to destabilise the state and undermine the president.

Presidential spokesman Dmitry Peskov said Mr Putin had noted “that this cruel murder has all the makings of a contract hit and is extremely provocative”.

The investigators offered a reward of three million roubles ($48,000) for information leading to the killers.

A rally was also held in St Petersburg. The banner says: “Boris Nemtsov – we won’t forget, we won’t forgive”.

Mr Yashin confirmed that Mr Nemtsov was preparing documents on Russian military involvement in Ukraine before his death.

Mr Nemtsov, 55, had been dining at a restaurant with his girlfriend Anna Duritskaya on Friday night.

They left together to walk to his flat, crossing the bridge, where a white car drew up and Mr Nemtsov was shot four times with a pistol at around 23:40 (20:40 GMT).

Ms Duritskaya has expressed a desire to return to her home country, Ukraine, but her lawyer said her movement had been restricted. Officials said she could be subject to “additional investigative action”.

In a telegram to Mr Nemtsov’s mother, published on the Kremlin website, Mr Putin vowed to bring the killers to justice. He praised Mr Nemtsov’s openness and honesty.

Mr Nemtsov served as first deputy prime minister under President Boris Yeltsin in the 1990s but fell out of favour with Mr Putin and became an outspoken opponent.

Are you taking part in the march? You can email [email protected] with your comments. Please include a telephone number if you are willing to be contacted by a BBC journalist.