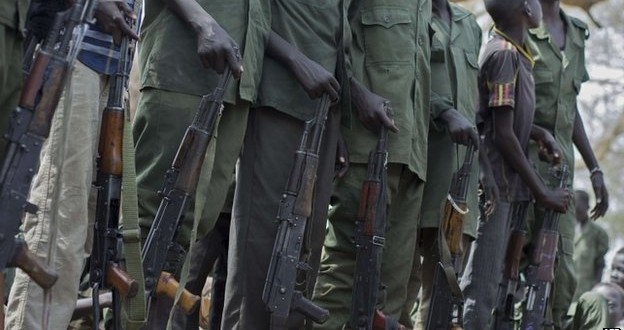 Hundreds of boys in South Sudan have been kidnapped and forced to become child soldiers, the United Nations children’s agency says.

The figure is a big increase on the 89 child abductions reported by Unicef last month.

Their latest statement blamed a militia group allied to the government.

South Sudan is in a state of civil war with forces loyal to President Salva Kiir pitted against rebels led by former Vice-President Riek Machar.

Unicef said the boys were abducted by the Shilluk Militia, under the control of Johnson Oloni. The government has previously said it has no control over the group.

“We fear [the children] are going from the classroom to the front line,” said Unicef’s representative in South Sudan, Jonathan Veitch.

Witnesses report seeing children as young as 12 carrying guns, according to the UN.

The seizure of the boys happened in an area known as Wau Shilluk, in oil-rich Upper Nile state.

About 1.5 million people have been displaced by the fighting in the country and 2.5 million are facing severe food shortages.