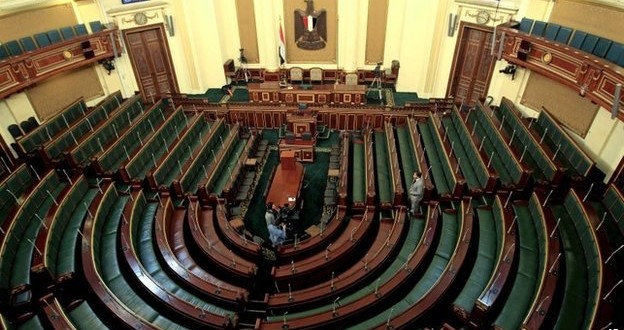 Egypt elections set to be delayed

Egypt’s Islamist-dominated House of Representatives was dissolved in 2012

Parliamentary elections in Egypt are set to be delayed after the Supreme Court ruled part of an election law unconstitutional.

The ruling struck down part of the law that defined electoral districts.

Voting had been due to start on 21 March and run into April. A electoral commission spokesman said a “new timetable” was being drawn up.

Egypt’s main assembly was dissolved in 2012. The election is due to be the final transition from military rule.

He was later elected president in May 2014.

The elections were scheduled to be held in several stages, but Sunday’s ruling has forced authorities to rethink their plans.

Mr Sisi approved a constituency law in December, creating 567 parliamentary seats. Of those, 420 which would be contested by individual candidates, 120 allocated according to party lists and 27 assigned by the president.

His supporters are expected to dominate the new chamber.

Following the court ruling the president asked for the law to be redrafted within a month. Candidates will then be asked to register again.

Mr Sisi has called for a prompt redrafting of the law

Lawyers who appealed against the law told the AFP news agency that in its current form it did not adequately represent the electorate.

One analyst told Reuters news agency that a delay was now inevitable.

“The new law may combine or add electoral districts… and that means we are, practically speaking, looking at a delay of no less than three months,” said political science professor Hassan Nafaa.

Egypt’s last elected People’s Assembly – which was dominated by Islamists – was dissolved in 2012 after the country’s highest court ruled that the vote had not been constitutional.

Now the same court has decided that a clause on voting districts in the rules governing the forthcoming parliamentary elections is not constitutional either. The law must now be redrafted.

One problem for authorities is the timing of the holy month of Ramadan, which begins in June. They will not want the elections running into this period, when observant Muslims fast from dawn to dusk.

The latest developments highlight Egypt’s difficult path towards democracy after the ousting of Islamist President Mohammed Morsi. At the time, the army announced a political roadmap. This will be only be completed when a new parliament has been elected.

The first two steps of the political roadmap was the adoption of a new constitution in January 2014 and the presidential election.

The previous House of Representatives was elected in early 2012 and dominated by supporters of Mr Morsi and his Muslim Brotherhood.

It was dissolved in June by military decree, a decision eventually accepted by Mr Morsi when he became president.

His term in office was short-lived and he was ousted in July 2013.

Since his overthrow the military has launched a crackdown on the Islamist movement that has left more than 1,500 people dead and more than 16,000 in detention.

Mr Sisi governed as a military ruler before stepping down from the military and winning an overwhelming election victory in May last year.