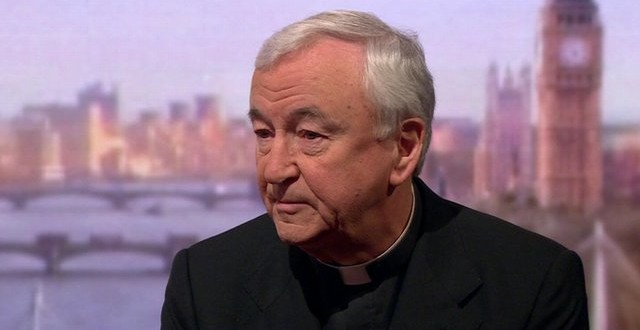 Cardinal Nichols: “Every party has to be tested on its approach to immigration”

Politicians from all parties must be “tested” on their approach to immigration, Archbishop of Westminster Cardinal Vincent Nichols has said.

The head of the Roman Catholic church in England and Wales said he was “dismayed” immigration was such a big issue in the forthcoming election.

Speaking to the BBC’s Andrew Marr programme, he said London would “grind to a halt” without immigrant workers.

Cardinal Nichols stressed that he endorsed no single political party, but wanted people to engage with politics and ask questions.

“I think every party has to be tested on its approach to immigration. No government in the last three decades has solved the problem of immigration, so this is a really difficult issue,” he said.

“But what I want to say is these are people we’re talking about – the people who drown in the Mediterranean trying to get into Europe, the people caged in Calais because they’re desperate. We have to somehow keep the human person at the front of all these issues.

“And remember that this city for example would grind to a halt without the contribution of people who’ve come to this country.

Asked if he was “dismayed” that immigration is such a big issue in May’s general election, he said: “I am, because I do think we need to go back and say ‘What is our stance toward the world around us?”.

A letter from the bishops of the Church, which will be read out or distributed at Sunday Masses, asks Catholics to reflect on what kind of society they want “here and abroad”.

It urges them to consider the stance being taken by candidates in their constituency on issues including abortion, assisted suicide, and marriage.

Cardinal Nichols said that people had become too disconnected from politics, which he argued was “everybody’s business”.

“I think people are struggling to stay with this very long general election campaign. There’s still 10 weeks to go,” he said.

“We don’t want that to drift away. Nor do we want it to get into criticism of individuals. In a sporting term, let’s play the ball, not the man. Let’s keep an eye on the issues.”

More than 500,000 copies of the bishops’ letter have been sent to Catholic parishes across England and Wales.