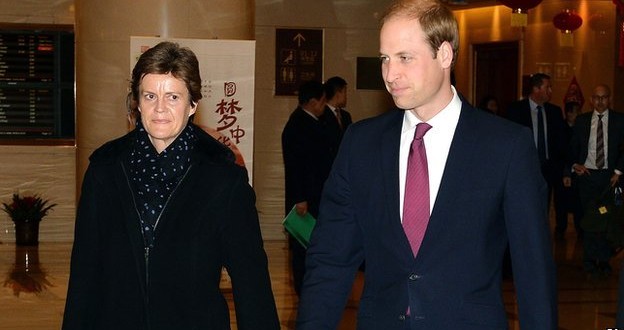 The Duke of Cambridge has arrived in China for the first UK royal visit to the country in nearly 30 years.

The high-profile trip will see him highlight the illegal wildlife trade, visit some of the nation’s most famous sites and meet a rescued elephant.

Earlier he ended his visit to Japan by meeting survivors of the 2011 tsunami.

The last visit to China by a member of the Royal Family was in 1986, when the Queen and Prince Philip travelled to the country.

On Monday, the Duke will tour Beijing’s famous Forbidden City before flying to Shanghai where he will launch the three-day Great Festival of Creativity at the city’s Long Museum.

It will promote British commercial creativity and innovation to a business audience from the UK, China and beyond, with the aim of creating opportunities for UK companies wanting to expand their markets.

William will also attend an event before the premiere of the Paddington movie in Shanghai, and is expected to meet the famous bear.

He will travel to Yunnan province on Wednesday where 250 wild Asian elephants still roam free.

William will give a speech at a regional wildlife and conservation conference after seeing rescued elephants and learning how local communities live alongside the large animals.

At state level, the objective of Prince William’s three day visit is to promote brand Britain, and at a personal level, it’s an opportunity to talk about his abiding passion: elephant protection.

But three days is a long time in royal diplomacy and although William is already more deft at this kind of thing than his father or grandfather, he will have to move nimbly to dodge the elephants in the room.

His four days in Japan came to an end with William visiting the north-east coast where thousands were killed in the tsunami, triggered by a 9.0-magnitude earthquake in March 2011.

In the city of Ishinomaki, he met Hiroyuki Takeuchi, a retired journalist at the Ishinomaki daily newspaper.

The paper produced handwritten editions in the days following the tsunami, which killed almost 19,000 people and triggered a major nuclear accident.

A remaining muddy mark 8ft (2.4m) high an outside wall of a museum showed how high the tsunami reached

The duke told him that, like 9/11, everyone remembered where they were when they saw the images of the tsunami.

“It remains with you forever. You remember where you were. It must have been unbelievably terrifying for you and all the others,” he said.

Mr Takeuchi said: “Immediately afterwards it was like hell. So many died and their bodies were on the roads. It is still raw in my memory.”

The prince laid a bouquet for the victims of the 2011 tsunami in Ishinomaki where 3,000 people died