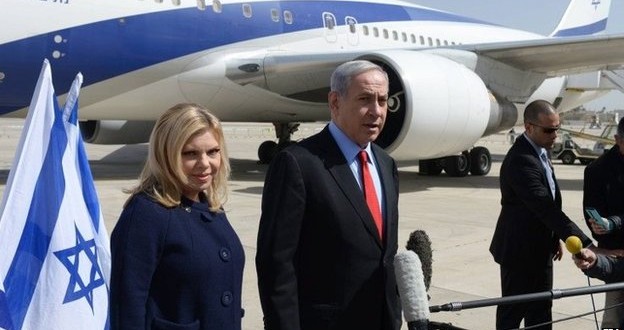 Netanyahu goes to US for Iran speech

Israeli PM Benjamin Netanyahu is on his way to the US to argue his case against a possible nuclear deal with Iran.

Mr Netanyahu says the deal would be inadequate to prevent Tehran from acquiring a nuclear bomb.

He is due to give a speech in Congress on Tuesday which was not agreed in advance with the Obama administration, angering the White House.

The speech comes two weeks before Israeli elections, with his Likud party under pressure in domestic polls.

The US and other powers – the so-called P5+1 – are negotiating with Iran on its nuclear programme.

They want a framework agreement by the end of the month which addresses concerns that Iran is seeking nuclear weapons technology, something Tehran denies.

Before getting on the plane for Washington, Mr Netanyahu described his trip as a “fateful and even historic mission”.

“I feel deep and genuine concern for the security of all the people of Israel,” he said. “I will do everything in my ability to secure our future.”

Mr Netanyahu was invited to speak in Congress by Republican leaders.

But the BBC’s Barbara Plett-Usher in Washington says the move has angered Democrats, some of whom feel forced to choose between Mr Obama and their desire not to upset Israel.

Several Democratic members of Congress including Vice-President Joe Biden have said they will not attend the speech.

Mr Kerry said the Israeli prime minister was “welcome, obviously” to speak in the US

The Israeli leader is expected to talk about Iran and Islamist militant groups.

But US Secretary of State John Kerry – who is due to meet Iran’s foreign minister in Geneva this week – said he hoped the speech would not turn into “some great political football”.

However, he told ABC’s This Week programme that Mr Netanyahu was “welcome to speak in the United States, obviously”.

Mr Netanyahu’s visit will start with an address on Monday to the American Israel Public Affairs Committee – the largest Jewish interest group in the US.

Also speaking will be Susan Rice – President Barack Obama’s National Security Adviser. On Wednesday, she said Mr Netanyahu’s visit was “destructive to the fabric” of the US-Israel relationship.

Quoted by Iran’s Fars news agency, he said world opinion wanted to hear a message of peace and security.

“This message comes from Iran’s peace-seeking negotiations… and not from Netanyahu’s words at the Congress,” he added.

President Obama does not plan to meet Mr Netanyahu next week.

The White House cited the “long-standing practice” of not meeting government leaders close to elections, which Israel will hold in mid-March.

Mr Netanyahu is fighting a tough election against the Labour Party’s Yitzhak Herzog, who has focused on the prime minister’s cooler relations with Mr Obama.