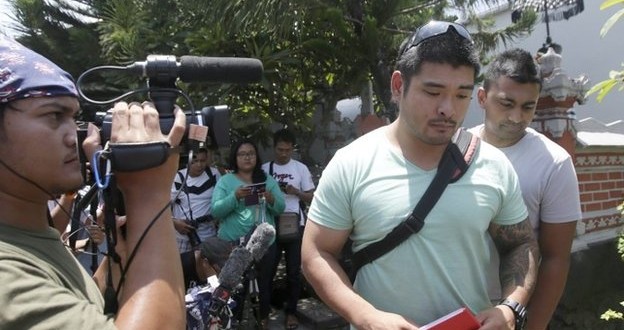 The brother of Andrew Chan, one of two Australian men sentenced to death in Indonesia, has pleaded for his brother’s life on television.

Andrew Chan was sentenced to death in 2006 for his role in a drug trafficking group known as the Bali Nine.

The executions by firing squad are believed to be imminent.

Mr Widodo has dismissed previous calls for the death sentences against Andrew Chan and fellow Australian Myuran Sukumaran to be commuted.

On Saturday, Mr Widodo said Indonesia’s stance was “clear” on the pending executions, despite a suggestion by Australia’s Prime Minister Tony Abbott that he was “carefully considering” his position.

Andrew Chan and Myuran Sukumaran were arrested in 2005

Addressing Mr Widodo, Michael Chan told Indonesia’s TV One: “We are very sorry for this situation and we apologise for Andrew. It has brought a lot of unnecessary shame to Indonesian people and the country.”

Michael Chan said his brother and Sukumaran were “trying to keep hope” and wanted to continue their rehabilitation in Kerobokan prison on the island of Bali.

“All the painting, computer classes, rehabilitation around church services and all those things the boys have done in the last 10 years, they would like to keep doing that,” he said.

Five minutes of the interview were broadcast, with Indonesian subtitles. An earlier 15-minute interview with the families of Chan and Sukumaran for Indonesian television was cut to just 45 seconds and not translated.

The death sentences have strained relations between Australia and Indonesia, which were only just recovering after being badly damaged by a spying row in 2013.

Indonesia’s Nusa Kambangan prison, where the executions are due to take place

Australia has been working behind the scenes to save the men’s lives.

But Mr Widodo dismissed Mr Abbott’s suggestion he was reconsidering his position in an interview with Indonesian media on Friday, saying: “Our stance is clear. Our laws cannot be interfered [with].”