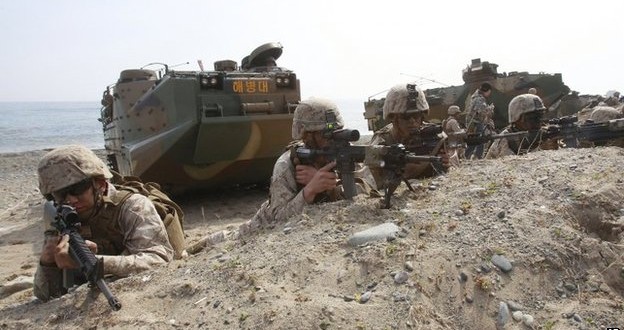 The two missiles, with a range of 490km (305 miles), were fired from the western city of Nampo into the sea east of the Korean peninsula, the South Korean military said.

It traditionally shows its displeasure with missile tests and louder rhetoric.

Seoul and Washington describe the military exercises as defensive in nature. North Korea calls them a rehearsal for invasion.

In a statement, South Korea’s Joint Chiefs of Staff said the missiles, fired early on Monday, were probably Scud Cs or Scud Ds.

The military remained “vigilant against any additional launches”, it said.

Earlier in the day the North Korean military condemned the exercises as “undisguised encroachment” on national sovereignty.

Aggression should be dealt with by “merciless strikes”, it said in a statement carried by KCNA news agency.

In 2013 the joint exercises led to a prolonged surge in tensions, with North Korea threatening pre-emptive nuclear strikes and cutting a military hotline with the South.

Drills in 2014 passed off relatively quietly, however.

In January North Korea said it would offer a moratorium on nuclear testing if the joint exercises were cancelled. The US rejected this suggestion as an “implicit threat”.

North Korea has conducted three nuclear tests, in 2006, 2009 and 2013. Six-nation talks aimed at ending its nuclear programme have been stalled since early 2009.