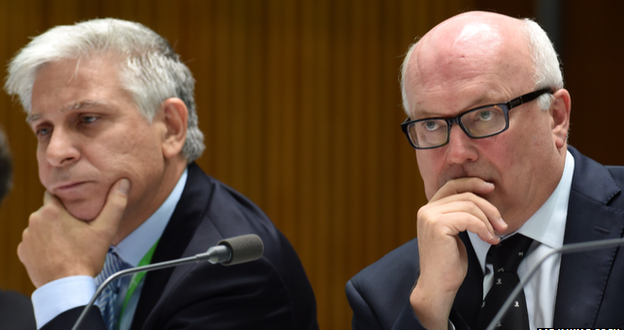 The censure motion, introduced on Monday by Labor Senate Leader Penny Wong, was passed by 35 votes to 32.

It accused Mr Brandis of seeking Ms Triggs’ resignation and failing to protect her from “malicious attacks”.

Police have been asked to investigate whether the job offer was unlawful.

Ms Wong said in the motion filed on Monday that Mr Brandis was “unfit to hold the office of attorney general” after his department allegedly attempted to pressure Ms Triggs to resign from the Human Rights Commission (HRC) by offering her another position.

The reported job offer to Ms Triggs followed an HRC report condemning the detention of children of asylum seekers. The government claims Ms Triggs’ probe was delayed for political reasons.

Mr Brandis has admitted asking Chris Moraitis, the secretary to the Attorney General’s Department, to offer Ms Triggs a different role but claims the offer was made as “a matter of goodwill”.

The Labor censure motion was supported by the Greens, senators Glenn Lazarus and Dio Wang from the Palmer United Party, and their former colleague Jacqui Lambie, now an independent.

Brandis is the third Abbott government minister to be censured in the senate. The censure does not carry any further punishment for Mr Brandis.

Mr Brandis reiterated during Monday’s debate that he had “lost confidence” in Ms Triggs and argued that Labor MPs had sought to paint the HRC as “beyond scrutiny”.

Senator Abetz, a Liberal Party colleague of Mr Brandis, criticised the motion, calling it “a joke” and accusing Ms Wong of a “personal attack” against Mr Brandis.

“If you support Gillian Triggs, you support this motion against Senator Brandis,” she said.

The HRC report that triggered the controversy said a third of detained children had developed mental illnesses of such severity that they required psychiatric treatment.

It argued that detaining children violated international human rights law and called for their immediate release.

Prime Minister Tony Abbott called the report a “political stitch-up” and said the government had lost confidence in Ms Triggs.

Both Mr Abbott and Mr Brandis claim Ms Triggs played politics by investigating the problem under their government, rather than under Labor when the number of children in detention was higher.

Labor’s Shadow Attorney General Mark Dreyfus has asked the Australian Federal Police to investigate whether the job offer to Ms Triggs, who has a five-year tenure as HRC president, was unlawful.