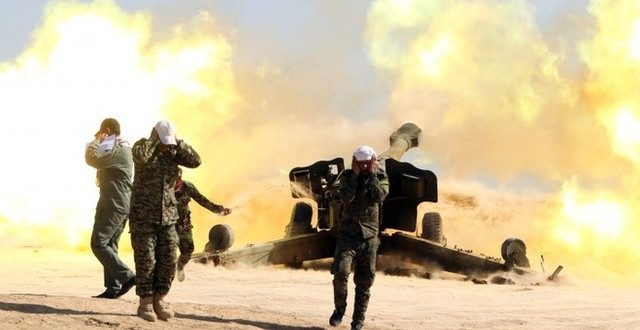 Iraq moves against IS in Tikrit

Ahmed Maher reports from Baghdad: ”The capture of Tikrit could be a very good boost to the government forces”

Iraq has launched a military operation to recapture Saddam Hussein’s hometown of Tikrit from Islamic State (IS).

Troops and militia were said to be attacking on different fronts, backed by airstrikes from Iraqi fighter jets.

The government says that its forces are advancing into the city but this has not been confirmed.

Tikrit lies 150km (95 miles) north of the capital Baghdad and was seized by IS militants in June 2014.

Al-Iraqiya TV said that IS militants had been dislodged from some areas of Salahuddin province, outside Tikrit.

It added that Iraqi troops and fighters from the Popular Mobilisation Forces, an umbrella group of Shia militia fighting IS, were moving into Tikrit as airstrikes hit militant strongholds.

Tikrit was seized by IS militants in June last year

Government forces say they are 5km away from the heart of the city, the BBC’s Ahmed Maher reports in Baghdad, but this has not been confirmed by independent sources.

Our correspondent says that thousands of Shia militiamen are reported to be participating in the offensive.

Shia militia have done much of the fighting against IS militants but have also been accused of killing scores of Sunni civilians in apparent revenge for attacks carried out by the group.

Government forces are backed by an alliance of volunteers mainly from the Shia community but also Sunni tribal fighters.

The Popular Mobilisation Forces was formed last summer following the collapse of army troops after IS militants swept through the Sunni heartlands in the north and west of Iraq.

The jihadist movement is backed by Sunni insurgents, who started to take up arms against the Shia-led government in late 2013 after months of protests against what the Sunni community perceived as marginalisation and discrimination.

Several government have attempted to reclaim Tikrit but have failed since July 2014.

If the ongoing military operation succeeds, the government forces and their allies will face a much bigger challenge to retake the main stronghold of IS in the north, the city of Mosul.

He declared the start of the operation late on Sunday, as tens of thousands of troops and militia gathered in the central town of Samarra in preparation for the offensive.

Mr al-Abadi offered to pardon all Sunni tribal fighters who “who have been misled or committed a mistake to lay down arms” and abandon IS.

He described it as a “last chance”, saying that the city of Tikrit would soon be returned to its people.

Tikrit, hometown of former President Saddam Hussein, was the second major gain for IS after the group captured the city of Mosul in June last year.

Mosul was home to more than a million people when it fell to IS after the militants launched an offensive in northern Iraq that saw it seize large swathes of the country.

Soldiers and allied Shia militiamen have now begun to recapture territory from IS north of Baghdad, with the help of US-led coalition air strikes.

At the same time, Kurdish peshmerga forces have been making advances around Mosul.

In February, Mr al-Abadi said that Iraqi armed forces would be launching a major offensive “in a few months’ time” to retake the city from IS militants.

Are you in the region? What are your views on this story? You can share your experiences by emailing [email protected]. If you are available to talk further with a BBC journalist, please include a contact telephone number.