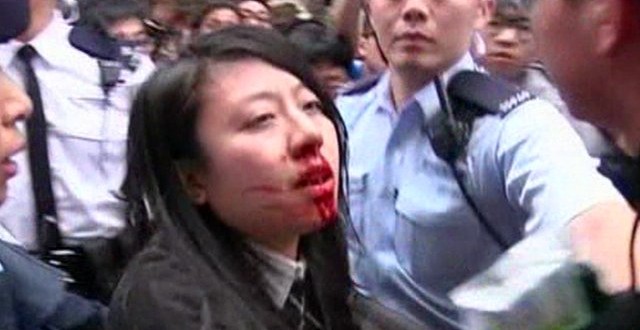 A protest against shoppers from mainland China turns violent, as Russell Trott reports

Hong Kong police have arrested more than 30 people after the third angry protest in a month against shopping tourists from the Chinese mainland.

Clashes broke out on Sunday as hundreds of people demonstrated in Yuen Long, near the border with China.

Locals say the so-called parallel traders from China are exploiting visa rules to buy goods in Hong Kong to sell at a profit across the border.

But some residents accused the protesters are disrupting business.

The anti-trader protesters marched in the suburban town of Yuen Long, where many business cater to the huge number of Chinese tourists.

They say that networks of mainlanders come to Hong Kong to buy high-quality products at lower cost – because Hong Kong does not charge a goods and services tax – and that this drives up retail rental prices and forces out normal shopkeepers.

They want the government to change rules which allow mainlanders to cross the border multiple times in a day.

“There is a lot of anger from other people on Chinese smugglers because we just don’t like how they drive up all the prices, drive up everything, create a lot of chaos, and we aren’t benefiting from it,” said protester Kelvin Lee, from Hong Kong Indigenous, one of the two groups that organised the demonstration.

But local man Tom Lau told Reuters the mainlanders just wanted to buy quality products, and that the protesters were simply “stirring up trouble”.

Later on Sunday scuffles broke out after some village residents who opposed the event hurled insults at the protesters.

Police then stepped in with batons and pepper spray to control the crowds.

Thirty-six people between the ages of 13-74 were arrested for offences including possessing offensive weapons, assault, disorder and fighting, police said.

On Monday, Hong Kong’s Secretary for Transport and Housing Anthony Cheung said the government would consider looking again at the territory’s capacity to host tourists.

“Too many tourists can be a good thing, but also it creates pressure,” he said according to Hong Kong’s South China Morning Post.

“We hope that through policy, we can make sure that it does not have a negative impact on local residents or affect their daily lives,” he said.

Two other similar protests in Hong Kong’s suburban areas this year have turned chaotic, including one last month inside a shopping mall.