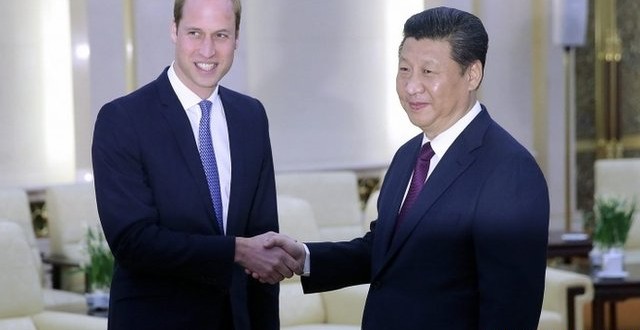 The Duke of Cambridge has met Chinese President Xi Jinping, as the prince begins the highest-profile UK royal visit to China in nearly 30 years.

The president said the Royal Family had contributed “positively” to co-operation between China and the UK.

Prince William presented him with an official invitation from the Queen to make a state visit later this year.

The meeting in Beijing’s Great Hall of People also saw the two men discuss their mutual love of football.

The prince’s trip will see him promote “brand Britain”, highlight the illegal wildlife trade and visit some of the nation’s most famous sites.

The duke is the most senior British royal to visit China since the Queen’s tour of the country in 1986.

Prince Charles has never visited China and he described Chinese officials as “appalling old waxworks” in a leaked diary, written at the time of the Hong Kong handover in 1997.

BBC China editor Carrie Gracie said the meeting between Prince William and the Chinese president symbolised an improvement in the relationship between the two countries. The relationship is now focused on business after a run of political differences over Hong Kong and Tibet, she said.

Speaking through an interpreter, President Xi told the prince: “The British Royal Family holds great influence, not just in the UK but across the world.

“Over the years the Royal Family has shown great interest in, and support for, Chinese/UK relations.

“And members of the Royal Family have done a lot and contributed positively to changes and co-operation between our two countries in areas ranging from trade to environment protection… and cultural exchanges.”

He also said the prince’s visit would “surely go a long way to developing mutual understanding and friendly ties between China and British people”.

Prince William thanked the president “enormously” for inviting him to the Great Hall of the People and said: “It’s been a long interest of mine, for many years, to come and visit China.”

The prince, who is an Aston Villa fan, talked about their mutual love of football.

“I’m looking forward to learning about China’s football,” he added.

Prince William had time to visit one of Beijing’s landmarks, the Forbidden City

The duke visited a traditional Beijing courtyard house, which has been turned into a museum

While at the British ambassador’s official residence, the prince was tasked with adding the finishing touches to TV cartoon character Shaun the Sheep.

It is one of five sculptures on display in the ambassador’s garden and is part of the Year of Cultural Exchange, a celebration of UK and Chinese creative talent set up by both governments.

The duke also visited a traditional courtyard house, which has been been restored and turned into a museum by charities related to his father, Prince Charles.

Later the prince will fly to Shanghai where he will launch the three-day business exhibition the Great Festival of Creativity, which will promote British innovation and push the benefits of doing business with UK firms.

At the state level, the objective of Prince William’s three-day visit is to promote “brand Britain”, and at a personal level, it’s an opportunity to talk about his abiding passion: elephant protection.

But three days is a long time in royal diplomacy and although William is already more deft at this kind of thing than his father or grandfather, he will have to move nimbly to dodge the elephants in the room.

In Shanghai, the prince will also attend the premiere of the Paddington movie and is expected to meet the famous bear.

He will travel on to Yunnan province, where 250 wild Asian elephants still roam free.

The prince will give a speech at a regional wildlife and conservation conference after seeing rescued elephants and learning how local communities live alongside the large animals.

The prince is on a tour of China and Japan to promote UK relations and business partnerships with both countries.

In Japan, he took part in a traditional tea ceremony, toured some of the Tokyo 2020 Olympic sites and visited Fukushima and the northeast region of the country, where thousands were killed in an earthquake and tsunami in 2011.

The Duchess of Cambridge is not with her husband as she is due to give birth to their second child in April.