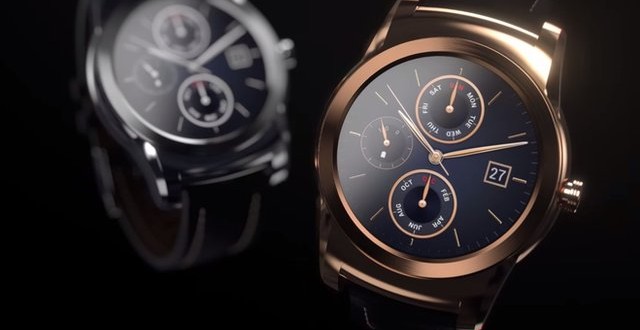 LG’s Watch Urbane comes in two editions – a basic version powered by Android Wear, and a high-end one with a 4G chip and a new operating system.

The latter can make and answer calls and send texts without needing to be linked to a phone.

The Huawei Watch uses Android Wear, and has a bigger display made out of sapphire crystal.

To date, demand for computer-powered watches has been limited.

Only 720,000 watches powered by Google’s Android Wear were shipped in 2014 despite considerable publicity for the launches of the Moto 360, Asus ZenWatch and Samsung Gear Live, according to market research firm Canalys.

But sales are expected to jump in 2015, in part because Apple is releasing its Watch in April alongside a big budget marketing campaign, which may benefit the wider sector.

The Watch Urbane models are LG’s third and fourth smartwatches, and the Huawei Watch the Chinese firm’s first.

The announcements were made on the eve of the Mobile World Congress trade fair in Barcelona.

The 4G-enabled Watch Urbane LTE features a 1.3in (3.3cm) plastic OLED display, a brushed stainless steel frame, and has three buttons on its side.

One of these acts as a panic alarm. When pressed it calls a preset phone number and sends details of the wearer’s location – provided by its on-board GPS chip – to the recipient.

In addition to making calls, it also provides a push-to-talk facility, acting like a walkie-talkie with other compatible devices on the same data network.

LG said the watch was its first device to run its new LG Wearable Platform OS, which would also feature in other future products.

The more basic model is the slightly thinner, but features a smaller capacity battery, just one side-button, a polished metal exterior and lacks GPS and NFC functionality.

Even so, one expert said its cheaper price and use of Android Wear OS – which provides calendar reminders, app notifications, map directions, emails and more, all sent via a compatible smartphone – was likely to make it the more popular option.

“I think LG is trying to do something a little different here by focusing on design, and that matters a lot,” said Carolina Milanesi, chief of research at KWP ComTech.

“Some people who want to be seen on the cutting edge might be interested [in the 4G version] but LG aren’t really thinking consumers will flock to it.”

The Huawei Watch features a 1.4in (3.6cm) crystal OLED display – which the company says is scratchproof and more vibrant than the competition – in a 4.2cm (1.7in) diameter stainless steel metal frame.

Its screen is slightly higher resolution at 286 pixels per inch than the 245ppi specification of LG’s devices.

Huawei unveiled its first smartwatch at Mobile Congress in Barcelona

The Chinese firm highlighted that it was also easy to recharge via a magnetic cradle.

Other features announced include:

“Consumers, specifically in the Western world, may not have expected a great smartwatch from Huawei,” said Thomas Husson from the consultancy Forrester.

Huawei’s other wearables also act as standalone activity trackers. The headphones use magnets to link the two buds together when not in use, helping prevent them from falling off the wearer

“The main challenge and key success factor for Huawei is now to establish its brand in the new connected world.”

Huawei also unveiled the TalkBand B2, a revamped version of its activity tracker wristband that can be split in two to allow one part to act as a Bluetooth headset.

In addition, it showed off the TalkBand N1, a pair of earphones that feature a built-in activity tracker and four gigabyte MP3 player, allowing them to be used for exercise without the need for another device.

With four smartwatch models unveiled in less than a year, there’s no doubting that LG is keen about wristwear.

But analyst Carolina Milanesi told me these models were essentially about the firm proving its innovation credentials. She certainly doesn’t expect them to fly off the shelves.

LG says its goal is to design a smartwatch that looks like a classic timepiece, but is packed with modern features,

The 4G-enabled Urbane feels like a step forward, but not a breakthrough.

The watch suffers from multiple trade-offs that might be turn-offs for consumers. It’s pretty beastly in size, for starters – it sits considerably high off the wrist.

And the battery life only lasts beyond a single day if you just use it like a normal watch, ie without using any of its apps or “smart” functionality.

But of course, using a smartwatch “just as a watch” is largely pointless, particularly when a non-smart watch battery can last for several years.

The challenge remains to try and get people interested in moving from classic watches, with their style and iconography, into souped-up tech equivalents.