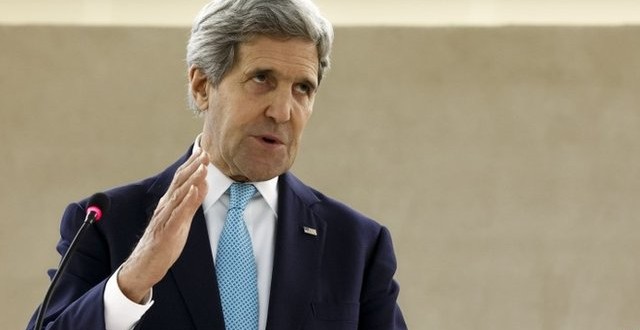 John Kerry: ”In Crimea and in the separatist-controlled areas of eastern Ukraine, men, women and children are being killed”

US Secretary of State John Kerry has accused pro-Russia separatists of a “piecemeal” approach to the ceasefire agreement for eastern Ukraine.

Speaking at the UN, he said the rebels were only withdrawing heavy weapons from the front line in selective areas.

Meanwhile Russian Foreign Minister Sergei Lavrov said there had been “tangible progress” with the truce.

Both Ukraine and the rebels say they are withdrawing heavy weapons in line with the deal made in Minsk last month.

Monitors from the OSCE security group have reported weapons movements on both sides but say it is too early to confirm a full withdrawal.

Mr Kerry and Mr Lavrov held talks on Monday as tensions remain high over the conflict. The fragile ceasefire is said to be broadly holding, despite some fighting in recent days.

Speaking at the UN Human Rights Council, Mr Kerry said he had warned Russia that it faced further sanctions if the conditions of the ceasefire were not met in full.

But he said he was optimistic the truce could be completed in “hours, certainly not more than days”.

“I’m very hopeful that it will in fact be the start of a change which would be an improvement for everybody,” he told a news conference in Geneva.

Mr Kerry’s meeting with Mr Lavrov – the first since he accused Russia of lying about its role in Ukraine’s war – coincided with the release of a UN human rights report.

The report states that the conflict has claimed at least 6,000 lives, with hundreds killed in the past few weeks alone, although it says that the real number of fatalities could be considerably higher.

The document refers to “credible accounts” of heavy weapons and foreign fighters continuing to flow into eastern Ukraine from Russia.

The Ukrainian government, Western leaders and Nato say there is clear evidence that Russia is helping the rebels with heavy weapons and soldiers – something Moscow denies.

The Russian FM called on the Ukrainian government to distance itself from “extremists” and urged Kiev to promote economic recovery of rebel-held areas.

He also described the brutal murder of Russian opposition politician Boris Nemtsov on Friday as a “heinous crime”.

Mr Nemtsov, who was shot on a bridge near the Kremlin, had been planning an anti-war rally and was said to be working on a report to expose the presence of Russian troops in Ukraine.

His allies accused the Kremlin of involvement but Mr Lavrov condemned the murder and vowed that Russia would find the killers.

“This is a heinous crime which will be fully investigated within the full framework of the law to ensure the perpetrators are brought to justice.”

Mr Kerry was expected to use the talks to call for an investigation examining not only who pulled the trigger, but who ordered, funded and co-ordinated Mr Nemtsov’s murder.

Last week, Mr Kerry had accused the Kremlin of “craven behaviour” in its support for the pro-Russian fighters.

Meanwhile violence has continued in the east of the country: