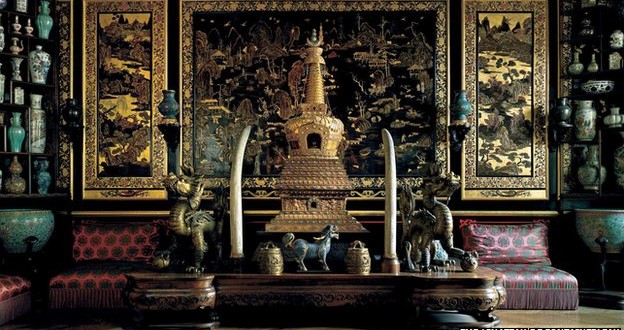 The Chinese Museum houses works once belonging to Empress Eugenie

Thieves have broken into Fontainebleau castle and stolen 15 Chinese artefacts in a lightning raid, the French culture ministry has said.

The robbery, at the Empress’ Chinese Museum housed by the castle, was over in seven minutes, the authorities said.

Among the items taken was a replica of a crown of the King of Siam, now Thailand, given to Emperor Napoleon III in 1861.

“They were among the most beautiful pieces in the museum,” said Jean-Francois Hebert, who runs Fontainebleau castle, about 50km (30 miles) south-east of Paris.

This enamel piece, among those stolen, dates from the reign of Emperor Qianlong in the 17th Century

“We think they (the thieves) were very determined, knew exactly what they were looking for and worked in a very professional manner,” he added.

The castle has been used by French kings since the 12th Century. It is now a national museum and a Unesco World Heritage Site.

The French culture ministry described it as “one of the most secure parts of the castle, equipped with alarms and surveillance cameras”.

An investigation is underway.

A replica of a crown of the King of Siam, given to the French emperor in 1861