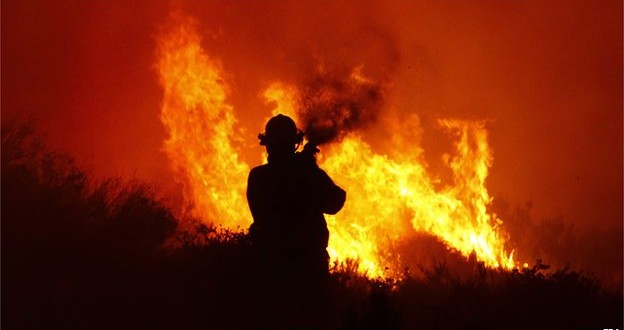 More than 100 South African firefighters are battling wildfires on the mountains around Cape Town.

Thousands of hectares of vegetation have been reduced to ashes on Chapman’s Peak, while several homes and a holiday lodge have been destroyed.

More than 50 people – residents of a retirement home – have been treated for smoke inhalation, officials say.

The fire started on Sunday and was fanned by strong winds, causing it to spread rapidly.

Dense, dark smoke can still be seen rising from the mountain.

Roads in the area have been closed because of poor visibility.

Four helicopters are on the scene, water-bombing the area.

Three mass care centres have been set up to accommodate those who have had to flee their homes.

Such fires are common in the area from November to May, when weather conditions are hot and windy, but it has been hotter than usual in recent weeks.

Helicopters have been water-bombing the fires

One firefighter has been injured and treated for burn wounds