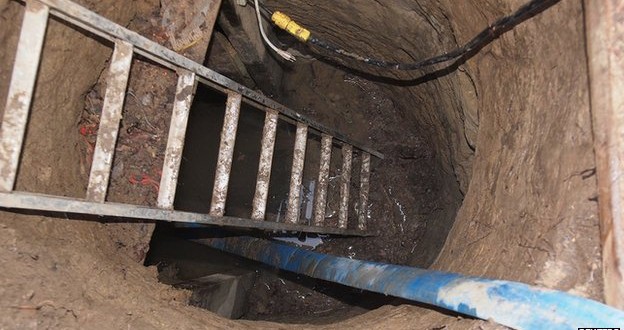 Police say they are no longer investigating the tunnel, and that there is no threat to the public

Police say that two men are behind a tunnel discovered in Toronto, and there was no criminality involved.

The two men, who have not been identified, told police that it was built for “personal reasons”.

Police say they are no longer investigating the matter, and that there is no threat to the public.

The discovery of the tunnel on 14 January raised concerns that it could have used for terrorist activities.

Spanning 10 metres in length and two metres high, the tunnel was filled with electrical generators, light bulbs, a wheelbarrow, and food and water containers.

A Remembrance Day poppy and a rosary were found nailed to the wall.

“Our concern was whether there was any criminal intent or threat to the people or the city. There was not. The investigation is concluded,” said Toronto police spokesman Mark Pugash.

The tunnel was located 25 metres from the Rexall Centre, which will host the Canadian Open tennis tournament and the Pan American Games this summer.

A conservation officer first found the site after stumbling upon a large amount of excavated dirt near a fence line in the woods.

Shortly after the discovery, police said that they believed it was used during the winter and that it had since been filled in.