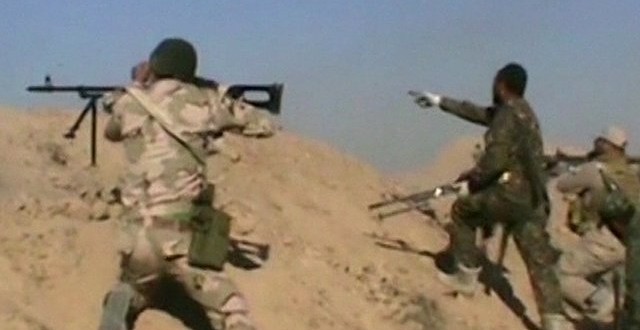 Iraq ‘seizes districts from IS’

The BBC’s James Robbins: “It’s the biggest fightback yet against so-called Islamic State”

Iraqi government forces say they have retaken some districts around Tikrit in their fight to recapture the city from Islamic State (IS).

A force of about 30,000 troops and militia are said to be attacking on different fronts, backed by air strikes from Iraqi jets.

A commander of Iran’s Revolutionary Guards is taking part in the operation, a Shia militia commander told the BBC.

Tikrit, north of the capital Baghdad, fell to IS militants last June.

Security sources told the BBC that pro-government troops had seized control of the two districts of al-Tin, near Tikrit university north-east of the city, and the district of al-Abeid, in the west.

Earlier, fighting was also reported in al-Dour, south-east of Tikrit, as well as in al-Alam, north of the city, and nearby Qadisiya.

There were few details of the operation but army and medical sources were quoted as saying that five soldiers and 11 militia fighters had been killed.

The Pentagon said that the US was not providing any air power in support of the operation.

A senior official told reporters: “This is Iraq, this is their country, their military, their fight against Isil (IS).”

Iraqi Prime Minister Haider al-Abadi declared the start of the operation late on Sunday, as tens of thousands of troops and militia massed in the central town of Samarra.

Tikrit, in Salahuddin province, lies on the road to Mosul – Iraq’s second city which was also seized by IS last year.

Correspondents say the current operation is crucial to any Iraqi plans to retake Mosul.

There were early claims of rapid advances being made as government forces pushed towards Tikrit from several directions.

But previous assaults on the militants there have been beaten back despite claims of victory by the state forces, so it will be some time before the fate of this latest offensive becomes clear.

It is a battle of great importance. Both the Iraqi prime minister and the Americans have been heralding an even more significant push in the coming months to recapture the biggest city in northern Iraq, Mosul, which also fell to IS last June.

That campaign would be thrown into doubt if the government fails at Tikrit, which controls the strategic highway linking the south with the north.

Campaign key to rolling back IS advance

Since the IS advance across Iraq last summer, Gen Soleimani has personally overseen the defence of Baghdad and helped to organise pro-Iranian Shia militia.

He has been pictured visiting the front lines north of the capital on several occasions.

Iraqi forces were pounding IS positions with rockets and artillery

Tikrit is the hometown of deposed leader Saddam Hussein and was seized last year by IS militants backed by anti-government Sunni allies loyal to Saddam’s banned Baath party.

Iraq is split between a Sunni Muslim minority, many of whom supported Saddam Hussein, and the Shia Muslim majority.

Since Saddam was toppled, Sunnis have felt increasingly marginalised by the Shia-led government in Baghdad.

Shia militia have done much of the fighting against IS militants – who adhere to an extreme interpretation of Sunni Islam – but have also been accused of killing scores of Sunni civilians in apparent revenge attacks.

On Sunday, Mr al-Abadi offered to pardon all Sunni tribal fighters “who have been misled or committed a mistake to lay down arms” and abandon IS.

He described it as a “last chance”, saying that the city of Tikrit would soon be returned to its people.