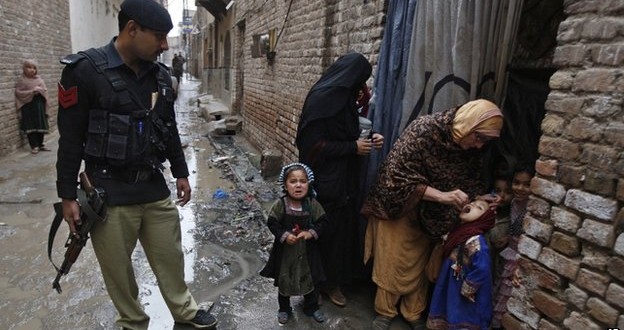 Pakistani authorities have conducted their first-ever mass arrest of parents for refusing to allow their children to be vaccinated against polio.

Authorities in Peshawar, in the north-west of the country, detained 471 people and charged them with “endangering public security”.

The local government says they will only be freed once they have pledged in writing to vaccinate their children.

The Taliban prohibit vaccinations and have attacked health workers.

The Pakistani government has declared “war” on the disease. “We have decided to deal with the refusal cases with iron hands. Anyone who refuses will be sent to jail,” said Riaz Khan Mehsud, deputy commissioner of Peshawar.

Pakistan accounts for the vast majority of polio cases globally and is one of only three countries where it remains endemic.

In 2014, polio cases in the country reached a 14 year high of 306. Nine new cases have been detected so far this year.

In June 2014, the World Health Organization (WHO) recommended that all international travellers from Pakistan be administered polio drops at airports to prevent its spread.

The Taliban have claimed that the polio vaccination drive is a front for espionage or a conspiracy to sterilise Muslims.

In November four polio vaccination workers were shot dead in the south-west city of Quetta.