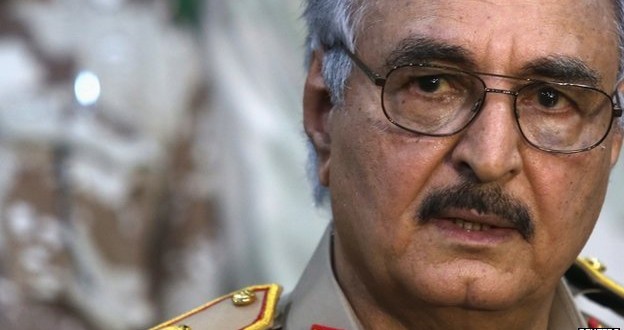 A controversial anti-Islamist, General Khalifa Haftar, has been named head of the Libyan army.

Libya’s internationally recognised government controls only a small part of the country, with Tripoli controlled by rivals Libya Dawn.

The country has been blighted by fighting between the factions, as well as attacks by jihadist groups.

On Monday there were reports of fighting between Haftar-controlled troops and Islamists in the city.

The former general is a divisive figure amongst Libyans. He has drawn praise for attempts to bring order to the chaos in the country but criticism for his aggressive use of force, including air strikes.

His critics say he targeted both moderate and hardline Islamist groups in the east, which further radicalised some people, according to BBC Libya correspondent Rana Jawad.

Who is General Khalifa Haftar?

As a young military officer he helped Colonel Muammar Gaddafi come to power, before fleeing the country in the 1990s to live in the United States.

He returned to Libya to fight against Gaddafi in the 2011 revolution, but it was only in 2014 that he rose to prominence with a vow to rid Libya of violent Islamists.

Initially the leader of a rogue militia, in recent months the government and Gen Haftar have sought to integrate their forces.

As well Libya Dawn, which has formed a rival administration, the government also faces threats from jihadist groups, including the Islamic State group, which claims to have taken control of the city of Sirte.

The group recently released a video appearing to show the beheading of 21 Egyptian Coptic Christians, leading to retaliatory airstrikes by Egypt.