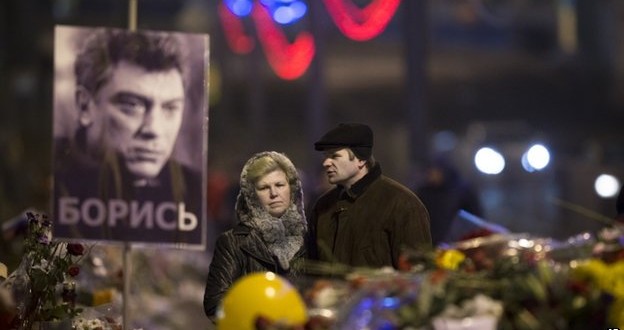 Nemtsov funeral to be held in Moscow

The funeral is due to be held of Russian opposition politician Boris Nemtsov, who was shot dead in Moscow.

The service at Moscow’s Troyekurovskoye Cemetery will follow a public ceremony at the Andrei Sakharov rights centre.

The speaker of the Polish senate said Russia had denied him a visa to attend the funeral.

Bogdan Borusewicz was to have led the Polish delegation to the funeral.

The Russian embassy in Warsaw said Mr Borusewicz had been denied a visa because he is on the list of Polish officials barred from travelling to Russia, a list drawn up after the EU imposed sanctions on Russia over its involvement in Ukraine.

Latvian MEP Sandra Kalniete told AFP news agency that she had been refused entry into Russia at Sheremetyevo airport in Moscow. She said she had not been given a reasonable explanation.

Earlier this week, a Moscow court rejected a request by prominent Russian opposition leader Alexei Navalny to attend the funeral.

Late last month, Mr Navalny was sentenced to 15 days in prison for handing out leaflets to publicise a forthcoming demonstration.

Tens of thousands of people marched through central Moscow on Sunday to honour Mr Nemtsov, with the opposition claiming that some 50,000 people attended the event.

Mr Nemtsov had been due to lead an opposition march that day, but his killing turned the event into a mourning rally.

Mr Nemtsov’s allies have accused the Kremlin of involvement, but President Vladimir Putin has condemned the murder as “vile” and “provocative”, vowing to find the killers.

Russia’s Investigative Committee said it was looking into a number of possible motives for the murder.

Mr Nemtsov, 55, had been walking home from a restaurant with his Ukrainian girlfriend Anna Durytska when he was shot four times.

Ms Durytska, a 23-year-old model, told Russia’s independent Dozhd television that she had not seen the attacker.

“I don’t know where he came from, but he was behind,” she said.

“I turned round and all I saw was a light-coloured car. I saw neither the brand nor the licence plate of the car that was driving away.”

The Federal Protective Service, in charge of presidential security, said its surveillance cameras did not record the shooting because they were pointed towards the Kremlin.

Ms Durytska has been allowed to return to Ukraine from Russia after being questioned by police.

Russia’s Investigative Committee said it was looking into a number of possible motives for Mr Nemtsov’s murder.

They include his opposition to the Ukraine conflict, Islamic extremism – Mr Nemtsov had Jewish ancestry although he had become Orthodox Christian – and an opposition “sacrifice” of its leader to destabilise the state and undermine the president.