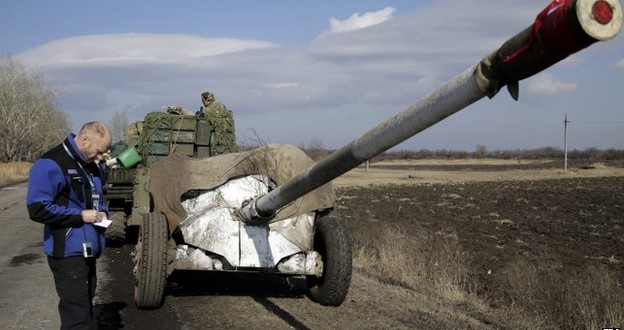 The leaders of Ukraine, Russia, France and Germany have agreed to send OSCE observers to areas of Ukraine where violations of a truce have been reported, Kiev says.

In a statement, Ukrainian President Petro Poroshenko says the leaders – who spoke by phone – backed Kiev’s proposal to begin with 10 locations in the east.

A statement on the Russian presidential website did not mention the proposal.

Both Ukraine and pro-Russian rebels say they are withdrawing heavy weapons.

A fragile ceasefire agreed in Minsk, Belarus, is said to be broadly holding, despite some fighting in recent days.

At least 6,000 people are believed to have been killed since the conflict in Ukraine’s eastern Donetsk and Luhansk regions erupted last April, a month after Russia annexed Ukraine’s southern Crimea peninsula.

The Ukrainian government, Western leaders and Nato say there is clear evidence that Russia is helping the rebels with heavy weapons and soldiers – something Moscow denies.

Mr Poroshenko’s statement said afterwards that “the parties have endorsed the Ukrainian proposal to send the OSCE (Organization for Security and Co-operation in Europe) observers to all locations of the ceasefire regime violation”.

John Kerry: ”In Crimea and in the separatist-controlled areas of eastern Ukraine, men, women and children are being killed”

Without mentioning this agreement, the Russian statement stressed on “the importance of implementing the ceasefire and the continuation of the withdrawal of heavy weaponry under the OSCE monitoring”.

Meanwhile, German government spokesman Steffen Seibert said the four leaders agreed that the OSCE should play a greater role and requested that the organisation publish daily reports on the situation on the ground.

The OSCE monitoring mission has previously reported weapons movements on both sides – but says it is too early to confirm a full withdrawal.

Earlier on Monday, US Secretary of State John Kerry accused the rebels of a “piecemeal” approach to the ceasefire deal.

He also said he had warned Russia that it faced further sanctions if the conditions of the truce were not met in full.