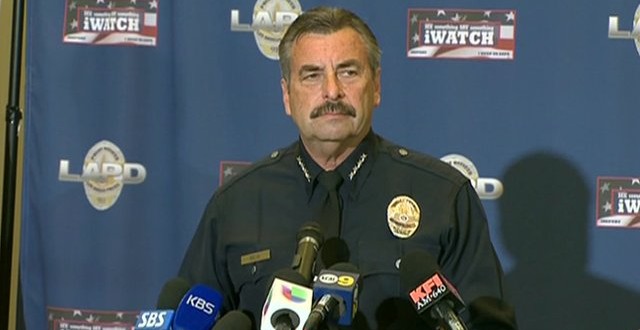 The Los Angeles police chief has presented evidence he claims shows that a homeless man reached for an officer’s weapon before being shot dead.

Charlie Beck also said two officers were wearing body cameras, but he has declined to release the footage.

He did not release any details about the man – known as Africa – who was shot by three officers just after 12:00 local time (20:00 GMT) on Sunday.

Protests about police actions have been held across the US in recent months.

They were sparked by a number of instances where police shot dead black men after a confrontation.

In the latest incident in Los Angeles, a graphic film released on social media shows a violent struggle between the homeless man and several officers in the city’s Skid Row area.

Chief Beck said the man engaged them in what he called a “brutal, brutal fight”.

Officers are said to have used a Tazer in an attempt to subdue him but the struggle continued.

The quick response from both the Mayor of Los Angeles and the city’s police chief shows how concerned the authorities are about the video which shows police officers killing a homeless man.

Police shootings, and videos of them which have gone viral, have led to street protests and violence in other parts of the US, and Los Angeles is keen to avoid any confrontation.

The shooting took place in the city’s Skid Row where thousands of homeless people live on the streets – many of them suffering from a mental illness.

While Skid Row is a community, this is not the kind of tightly-knit neighbourhood you find in a place such as Ferguson, Missouri, and the fact two officers were wearing body cameras also gives other views on what happened.

There were angry exchanges in the immediate aftermath of the shooting and they continued online, but Skid Row was quiet overnight and no protests or skirmishes have been reported.

People built a makeshift memorial to the man on Monday afternoon

A protestor near the site of the shooting

Flanked by a poster featuring several blown-up images related to the case, Chief Beck reiterated claims that the homeless man had attempted to grab an officer’s weapon.

Video showed the man reaching toward the officer’s waistband, he said, and the way that officer’s gun was later found partly cocked and jammed suggested a struggle for the weapon had occurred.

“You can hear the young officer who was primarily engaged in the confrontation saying that ‘He has my gun. He has my gun,'” said Mr Beck

People killed by police in LA since 2000

Footage from the two body cameras being worn by police officers would not be released imminently, he said, but would be submitted as evidence if a criminal or civil case is brought against the officers.

Mr Beck said all the officers had been specifically trained in dealing with people living in Skid Row and initially dealt with the man “with compassion.” At least one of the officers was African American.

The incident comes as police departments around the country face intense scrutiny for their tactics. Last year, highly publicised killings of black men sparked weeks of protests in the US.

Hours after the latest shooting, the hashtag #LAPDShooting was trending on Twitter in the US.

Video of the incident – posted on Facebook and played widely by US media – begins with what appears to be a black man swinging punches at police officers, and more officers soon arrive.

A voice can be heard shouting “Drop the gun!” four times before five shots ring out.

Two officers were injured in the incident. Both have been released from hospital, and one is currently using crutches.

Some of the officers involved in the shooting have been placed on leave, according to a police spokeswoman, but she declined to say how many, or release their names.