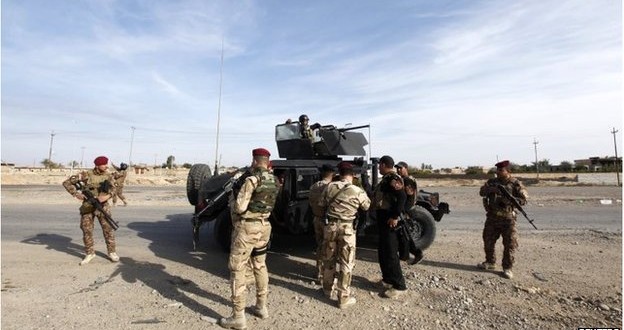 Australia to bolster force in Iraq

Australia is to significantly increase its contingent of troops training local forces in Iraq, Prime Minister Tony Abbott has announced.

An additional 300 troops will be sent to the country in a joint mission with New Zealand, Mr Abbott said.

They will join the 200 special forces already in the country tasked with training the Iraqi army.

The Royal Australian Air Force joined the US-led coalition against Islamic State (IS) in Iraq in October.

Mr Abbott said that supporting the Iraqi army in its fight against IS – which he referred to by another name, Daesh – was vital to domestic as well as international security.

The training mission was intended to take two years, he said, with a review after 12 months. He declined to say whether it would be Australia’s last troop commitment in the IS conflict.

The deployment brings the total number of Australian troops in the region to 900.

“We haven’t taken this decision lightly”, Mr Abbott said. “Ultimately it is Iraq that must defeat the death cult Daesh, but we do not want to leave the Iraqis on their own.

“We are naturally reluctant as a peace-loving people to reach out to far-away conflicts but as we know, this conflict has been reaching out to us for months now.”

Mr Abbott said that about 100 Australians had joined IS in Syria and Iraq, and a further 150 were believed to support the group from home.

He said that the conflict with IS had been “reaching out to our country for months”.

Defence Minister Kevin Andrews spoke after Mr Abbott, warning that “the world cannot ignore” the “brutality and depravity” of IS.

New Zealand Prime Minister John Key pre-empted the announcement last week when he revealed that New Zealand was sending 143 troops to Iraq in a joint operation with Australia.

IS militants currently control large swathes of both Iraq and Syria, having launched a major offensive in the region in June.

The training by Australian and New Zealand troops is designed to bolster Iraqi forces’ ability to push back against the IS advance.

The troops will be based in Taji, a rural district north of Baghdad.

On Monday, Australia made it a criminal offence for an Australian national to set foot in the Islamic State (IS) stronghold of Mosul without a legitimate reason such as a visit to family.

Similar restrictions were put in place in December making it an offence for Australian citizens to travel to the Syrian province of al-Raqqa, another IS stronghold.

Australia raised its terrorism threat level from medium to high in September, fearing attacks from Australian jihadists returning to the country.