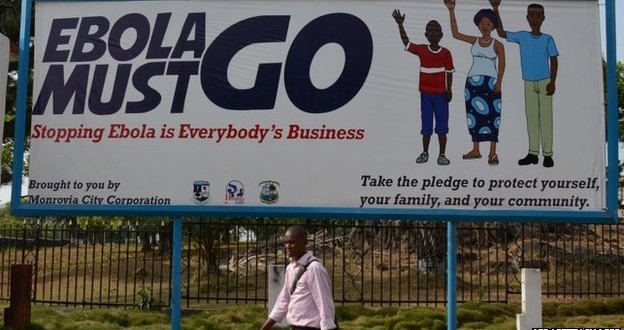 Liberian President Ellen Johnson Sirleaf has called for a “Marshall Plan” for the Ebola-affected countries of West Africa.

She was referring to the massive US aid programme for Europe launched after World War Two.

Her comments came after Sierra Leone was immediately granted more than $80m (£52m) to help end the Ebola outbreak and recover from its effects.

The IMF has pledged a $187m financial aid package for Sierra Leone.

Nearly $5bn has been pledged internationally to the Ebola effort, but less than half of the help has materialised.

About 600 delegates from around the world met in Brussels on Tuesday to talk about Ebola and long-term plans to fight the disease.

Nearly 10,000 people have died in the outbreak, the vast majority in Guinea, Liberia and Sierra Leone.

This meeting is not a donor pledging conference – it marks the beginning of a new conversation, whose objectives could be difficult to achieve.

It comes at a time when new cases of infection are significantly down.

Compared to HIV 30 years ago, this Ebola epidemic was met by a better organised international community. But even so, the pledges for support and actual disbursement of aid were slow to come. With the epidemic seemingly under control, the next phase – recovery – is going to be longer and more challenging.

The call is for a process led and owned by the affected countries. But real recovery will only be achieved if there is complementary long-term commitment from donor countries – a clear intervention with definitive objectives and timelines.

And the bar for transparency and accountability will no doubt be raised.

Speaking in Brussels, Ms Sirleaf said: “We believe that a regional approach would achieve the best recovery results. This can only be achieved with your support, the support of partners who will be willing to allocate resources to a regional plan that is home-grown.”

“There is no doubt that this will require significant resources, perhaps even a Marshall Plan… We believe however that this can be achieved through allocation of the additional resources committed by the European Commission”, she said.

“Resources can also be sourced from the CCR [Catastrophe Containment and Relief] Trust Fund established by the International Monetary Fund and by regional envelopes by the World Bank and the African Development Bank.”

On Monday the UN said that the struggle to contain the epidemic was reaching a “second phase”.

UN experts say the spread of the disease in West Africa has dropped to almost 10% of what it was six months ago.

Liberia in particular continues to have a low level of transmission, with only one new confirmed case in the week leading to 22 February. This compares to 34 in Guinea and 63 in Sierra Leone.

But the UN special envoy on Ebola, David Nabarro, told AP that the international community should not become complacent as getting to zero cases was “the hardest part”.

The BBC’s Anne Soy, in Brussels, says that there is a danger of donor fatigue, even though the Ebola outbreak has received a lot of attention from the international community.

The healthcare systems of Guinea, Liberia and Sierra Leone will also need help to recover from the effects of the outbreak.

Scarce healthcare resources have had to be directed to controlling the epidemic and it has become harder to get treatment for other diseases.