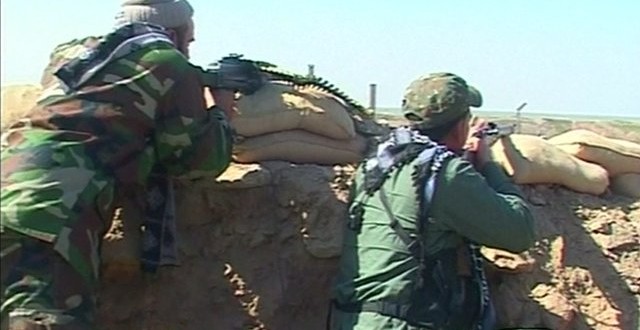 A senior commander in the main Shia alliance, Moeen al-Kadhimi, explained his strategy against IS to the BBC’s Ahmed Maher

Fierce clashes are taking place around the Iraqi city of Tikrit, as soldiers and militiamen attack Islamic State positions in the centre, officials say.

Battles were reported in the suburb of al-Dour, the western al-Zuhur district, the northern area of Qadisiya, and near the Teaching Hospital in the south.

But the government advance has been slowed by roadside bombs planted by IS.

Iranian commanders are helping to co-ordinate the operation, which is not backed by US-led coalition air strikes.

Iraqi Air Force helicopters and warplanes have conducted strikes since the offensive was launched on Sunday, but it is unclear whether Iranian aircraft have also been involved.

A security source in the Samarra Operations Command in Salahuddin province told the BBC that the Iraqi Army personnel and members of the Popular Mobilisation force, made up of Iranian-backed Shia militia, were engaged in fierce battles on the outskirts of Tikrit on Tuesday.

Clashes were taking place near the police station in al-Dour, a village to the south of the city that troops were reported to have entered on Monday afternoon, the source added.

Inside Tikrit, government forces were attacking IS positions in al-Zuhur, Qadisiya and the area around the Teaching Hospital, which is being bombarded by artillery and aircraft.

The source at the Samarra Operations Command also reported that Hamrin district, 20km (12 miles) east of al-Dour, had been recaptured.

During the battle, there were two attempted suicide car bomb attacks by IS militants. The militants were shot and their vehicles exploded before reaching the troops.

IS announced separately on Tuesday that a US national who used the nom de guerre Abu Dawud al-Amriki had carried out a suicide attack in Salahuddin province.

Shia militia to the fore

A militia commander told the BBC that progress inside Tikrit had been slowed by the large number of roadside bombs planted on main roads by IS militants since they seized Saddam Hussein’s hometown in June.

Moeen al-Kadhimi, a leader of the Popular Mobilisation force, said its fighters were advancing carefully.

“We’re not in a rush to end the Tikrit operation,” he added. “We’re very careful in our planning, especially because the IS military strategy is based on planting explosive devices on the roads, in houses, everything… even lampposts.”

“The other key strategy is the use of snipers. This is because they’re not ready to fight us face-to-face.”

Islamic State positions in Tikrit have come under attack from the north, west and south

Since the advance across Iraq last summer, Gen Soleimani has personally overseen the defence of the capital, Baghdad.

On Monday, he was pictured speaking to Iraqi army and militia commanders in the nearby city of Samarra, and was reportedly later seen directing operations on the eastern flank of Tikrit from the village of Albu Rayash.

But Mr Kadhimi said Gen Soleimani was “not fully supervising the operation”.

“We receive our orders and instructions from the Iraqi military leadership, but we make use of the advice of the foreign advisers,” he explained.

The militia leader also appealed for greater assistance from the US-led coalition and described the impact of its air campaign as “very minimal”.

A spokesman for the coalition told the Washington Post that it had not been conducting air strikes in support of the Tikrit operation because the Iraqi authorities had not requested them.

The UN has meanwhile warned that the operation in Tikrit “must be conducted with the utmost care to avoid civilian casualties, and with full respect for fundamental human rights principles and humanitarian law”.

Militia leaders have vowed to seek revenge for the massacre of hundreds of soldiers, most of them Shia, at nearby Camp Speicher in June.