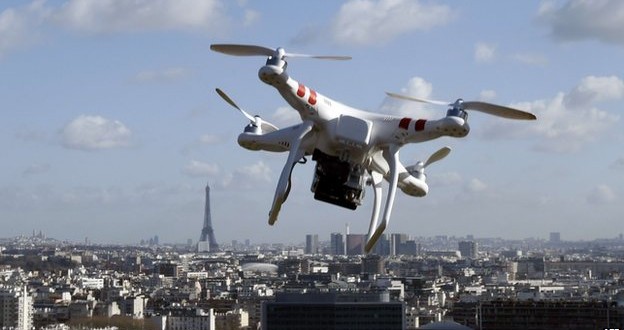 An Al Jazeera journalist has been fined €1,000 (£725;$1,120) for flying a drone in Paris last week in the midst of a security alert sparked by unexplained drone sightings across the city.

Mr Redman and two colleagues arrested with him are not believed to have been linked to the other drone sightings.

The latest mysterious drone sighting in Paris was reported on Monday night near the Place de la Republique.

According to France TV, the drone was spotted by a policeman guarding the offices of Liberation newspaper.

Flying drones over Paris without a licence is banned by law and no night flights are allowed over the city.

Mr Redman and two colleagues were arrested in a Paris park last Wednesday, after two successive nights of unexplained drone sightings over the city.

Al Jazeera said the team had been filming a report on the “recent mystery drones”.

Al-Jazeera said Redman, pictured here leaving court, and his colleagues were reporting on the drones

Redman was the only one to be charged. He had faced a maximum one-year prison term and a potential fine of €75,000.

On Tuesday, his lawyer told AFP news agency the punishment was “disproportionate, even if people are on edge in the current context”.

“These were just journalists who wanted to do their job,” he said.

Unmanned aerial vehicles were spotted in the early hours of Tuesday and Wednesday last week, over sites including the Eiffel Tower, the US embassy, the Invalides military museum and two historic gates, now transport hubs, on the fringes of the city.

Security at key sites in Paris was tightened last month after the murders of 17 people by Islamist gunmen and French officials increased alert levels were the main reason the drones were spotted.

Drone flights have raised security concerns in France before, with one sighting last month over the Elysee Palace, home of President Francois Hollande.

So far the authorities have not been able to establish who is behind the drone flights.