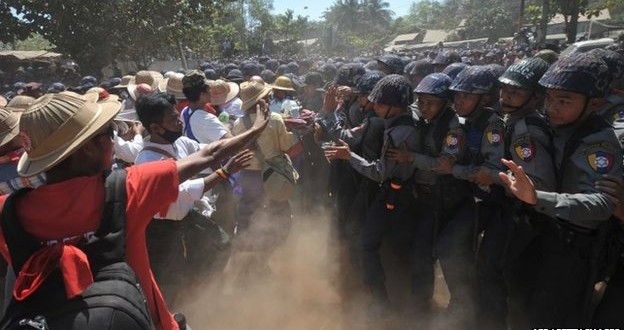 Hundreds of students protesting against an education bill in Myanmar have defied an order to disperse.

Riot police in the town of Letpadan formed a human chain to prevent 300 students from continuing their march to Yangon, the country’s main city.

The students began their march in Mandalay in January, in protest of a bill they say curbs academic freedom.

The authorities have promised changes to the education bill, but students say their protest will continue.

Tensions rose on Monday after police surrounded a monastery overnight in Letpadan, about 130km (80 miles) north of Yangon, where the students were camping.

The group had paused there last week following negotiations with the government but had planned to continue their march on Monday.

Police said they would act to “restore law and order” if the students tried to reach Yangon.

The Associated Press reported that three water cannon vehicles arrived on Tuesday, along with several trucks filled with riot gear.

Water cannon have arrived at the protest camp

The police had given the protesters an order to disperse by Tuesday afternoon but the deadline passed without incident.

Earlier, local media reported that Myanmar’s security and border affairs minister, Col Thet Tun, spoke at the monastery gate with student leaders but that the negotiations were unsuccessful.

Student leader Min Thwe Thit told AFP news agency that some protesters had decided to go on hunger strike until they were allowed to continue their march.

“The police are still blocking our way. We will not move from here until we get our demands,” he said.

The students believe the new education bill is undemocratic and centralises control over higher education institutes.

The military controlled Myanmar (also known as Burma) for decades, until the generals announced a transition in 2010 and handed power to a largely civilian government.

During military rule, student activists were at the forefront of several major uprisings.