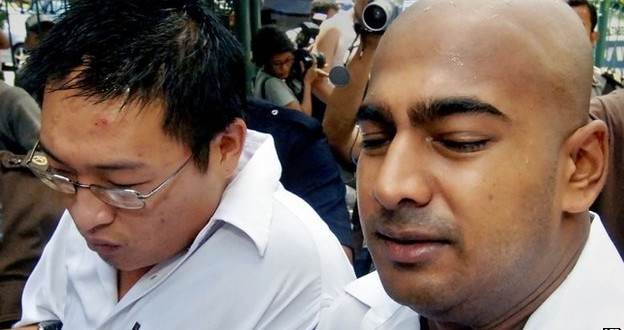 Two Australian drug-smugglers facing the death penalty in Indonesia will be transferred on Wednesday to the island where they will be executed, authorities in Bali have confirmed.

The execution by firing squad of Andrew Chan and Myuran Sukumaran, is expected soon after the transfer.

Australia’s foreign minister said she would continue to press the Indonesian government for a stay of execution.

Indonesia has some of the toughest drug laws in the world.

“It [the transfer] is planned for tomorrow [Wednesday] afternoon. Everything is ready. We will use two planes for the convicts and security personnel,” the head of the Bali High Court, Momock Bambang Samiarso, told journalists.

Chan and Sukumaran will be transferred from Kerobokan jail in Bali to maximum security prison facilities on Nusakambangan Island, off Java, where the execution will take place.

They will be accompanied by two other prisoners from the Bali jail, the Associated Press reported.

The pair – a 45-year-old Nigerian man and a 30-year-old woman from Spain – are also facing execution.

Indonesia’s Nusa Kambangan prison, where the executions are due to take place

The four will be simultaneously executed along with six others from Nigeria, Brazil, France, Ghana and Indonesia, AP said.

Australia has mounted a sustained diplomatic campaign to try and stop the shootings going ahead.

“I will continue to contact counterpart ministers to press for a stay of execution,” Australian Foreign Minister Julie Bishop was quoted as saying by the Sydney Morning Herald.

Chan and Sukumaran were convicted of trying to smuggle heroin out of Indonesia in 2005, but relatives and supporters have argued that they have been rehabilitated while in jail.

Lawyers for the two men said they were still attempting to mount a legal challenge but Mr Prasetyo said on Monday that any legal appeals were no longer valid following the earlier rejection of clemency by Indonesian President Joko Widodo.

Indonesia ended a four-year moratorium on executions in 2013.