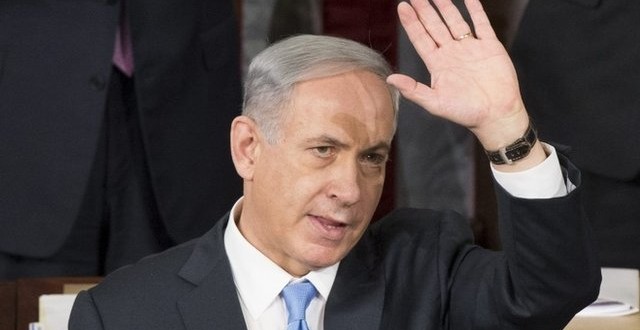 Netanyahu warns US over Iran deal

The Israeli prime minister has warned that a deal under discussion on Iran’s nuclear programme could “pave its way to the bomb”, rather than block it.

In a speech to US Congress punctuated by standing ovations, Benjamin Netanyahu depicted Iran as a “threat to the entire world”.

Talks on Iran’s nuclear programme are nearing a critical late-March deadline for an outline agreement to be reached.

The speech comes just two weeks before a closely fought election in Israel.

Mr Netanyahu insisted that he was not trying to meddle in internal US politics.

The White House had criticised his plan to address Congress – at Republican invitation, without consulting the White House – saying the Israeli leader was trying to swell US opposition to any Iran deal.

Following the speech, US President Barack Obama told reporters he had seen “nothing new” in the speech transcript.

“On the core issue, which is how to prevent Iran from obtaining a nuclear weapon which would make it far more dangerous, the prime minister did not offer any viable alternatives,” he said.

His speech was interrupted by regular standing ovations from US lawmakers

But some, such as House Democratic Leader Nancy Pelosi (right), held back applause and sometimes showed visible signs of disagreement

Mr Netanyahu’s speech, with handwritten edits, urged US lawmakers to block any forthcoming deal with Iran

The US, UK, France, Germany, Russia and China are seeking to reach agreement to curtail Iran’s nuclear programme in exchange for sanctions relief.

They fear Iran has ambitions to build a nuclear bomb – something Iran denies, insisting it is merely exercising its right to peaceful nuclear power.

Negotiators are currently working towards a late-March deadline for an outline agreement with Iran, which would be followed by a detailed deal by the end of June.

But Mr Netanyahu said: “We’ve been told that no deal is better than a bad deal. Well this is a bad deal, a very bad deal.”

The speech was classic Netanyahu. He mixed the politics of fear with the politics of bravery in adversity. Iran was gobbling up Middle East states – a reference to its influence in Syria, Lebanon, Iraq and Yemen – while Israel stood strong, never again allowing the Jews to be passive victims.

It was a direct intervention in American politics. Prime Minister Netanyahu wants the Congress to do all it can to block an agreement with Iran, if one is made.

Iran, he said, must change its aggressive behaviour before any deal.

Mr Netanyahu’s critics say he’s manipulating the close relationship between Israel and the US for political advantage. Democratic leader Nancy Pelosi said she was close to tears during the speech – because it was condescending and insulted the intelligence of Americans.

But there’s no doubt that Mr Netanyahu sees the threat from Iran as real, and his skilful rhetoric will connect with many Americans. If there is a deal, President Obama will need to deploy his own considerable way with words to sell it to his own people.

Mr Netanyahu was greeted with whoops and cheers as he made his way to the podium, shaking hands as he went.

His speech was frequently interrupted with applause, but dozens of Democrats stayed away – including Vice-President Joe Biden.

House minority leader Nancy Pelosi at times refused to clap and later issued a statement saying Mr Netanyahu’s speech had been an “insult to the intelligence of the United States” which had left her near tears.

Mr Netanyahu insisted the Israel-US relationship “must remain above politics” and that he was “grateful for the support of the American people”.

But he quickly went on to the meat of his speech, saying Iran had proven time and time again that it could not be trusted.

The country was on a “march of conquest, subjugation and terror”, he said.

“Iran’s regime is as radical as ever, the ideology is deeply rooted in militant Islam… it will always be an enemy of US”.

Its participation in the battle against Islamic State did not make it a friend, he said: “This enemy of your enemy is your enemy.”

Benjamin Netanyahu’s rivals in Israel’s election face a dilemma as the applause from the speech in Washington begins to die down.

It’s been hugely frustrating for them to watch him walking the world stage and worse still watching the speech on television.

They are the kind of television images you cannot buy in an election campaign – the Houses of Congress rising repeatedly in standing ovations.

But if they repeat their warnings that Mr Netanyahu is endangering Israeli security by alienating the White House they risk protracting a story which has played to the prime minister’s advantage.

Many of them, like the opposition leader Yitzhak Herzog, feel they’re just as tough on Iran as Mr Netanyahu – they just don’t have access to the world stage as he does.

Mr Netanyahu’s Likud party is already asking voters if they can imagine any other Israeli politician making such a speech.

The opposition want to start talking instead about the cost of living and the other issues where they feel they have an advantage – they just hope images of Mr Netanyahu basking in a warm bath of applause fade before polling day in two weeks’ time.

Mr Netanyahu went on to criticise the likely contours of the deal currently being negotiated in Switzerland, where Iranian Foreign Minister Javad Zarif met US Secretary of State John Kerry on Tuesday.

He said it relied heavily on international monitoring, when Iran “plays a pretty good game of ‘hide and cheat’ with UN inspectors”.

He said it would leave Iran with a vast nuclear infrastructure and lift restrictions on its nuclear programmes in a decade.

Nuclear Iran: What world powers want – and what they fear