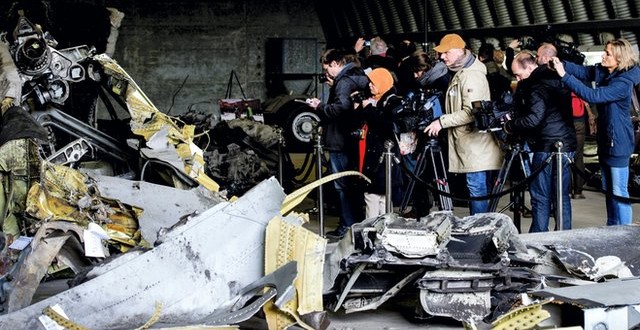 The BBC’s Anna Holligan: “These scenes are undeniably grim”

Families of those killed when Malaysia Airlines flight MH17 was shot down over Ukraine have for the first time seen wreckage of the plane in the Netherlands.

Relatives travelled to the Gilze-Rijen military air base to see the charred remains of the aircraft.

All 298 people on board the flight from Amsterdam to Kuala Lumpur were killed.

Dutch investigators are focusing on suspicion that the plane was downed by a missile on 17 July 2014.

The Dutch prosecutor leading the criminal case said on Tuesday it may have been a Buk surface-to-air missile launcher, although it was “too early to rule out other possibilities”.

A preliminary inquiry report in September said objects had pierced the Boeing 777 at high velocity over the territory held by pro-Russian rebels in eastern Ukraine.

The Ukrainian authorities and the West accuse Russia of supplying the separatists with the missile. Moscow denies the claim, suggesting that Ukrainian troops may have been responsible.

Green blades of grass poke through the fuselage. Puncture marks are visible on the left wing.

It is hard to look at the tangled, mangled mess without picturing the faces of those who were on board, like 17-year-old Elsemiek.

Her father, Hans, plans to come to see the wreckage because he says, it all helps a bit and he wants to know “everything”.

Every piece of the plane has been meticulously labelled. A cold and clinical collection, such a contrast to the chaos captured at the crash site.

The sections of the aircraft considered “most relevant” to the criminal and aviation investigations are soon to form part of a 3D reconstruction.

The cockpit has been hidden from the journalists’ view at the prosecutors’ request. These are potentially vital pieces of evidence which, the investigators hope, will help to establish the truth.

Pieces from the aircraft were brought to the base in the south of the Netherlands late last year as part of the Dutch-led inquiry.

The parts were spread across three hangars and included wings, wheels, pieces of fuselage and overhead luggage bins.

Some fragments were scorched black by fire, while other parts of the plane’s thin metal body were scratched, twisted and torn.

Around 500 family members are expected to view the wreckage over the course of the week.

Silene Fredriksz-Hoogzand, whose son, Bryce, and his girlfriend, Daisy Oehlers, were on board the flight, will visit on Saturday.

She said: “It brings it very close to home. It is where they spent their last hours.”

The remainder of the plane’s fuselage was twisted and torn

The Dutch Safety Board is leading the civilian probe and says the final report is likely to be published in October.

Its spokeswoman Sara Vernooij said experts were due to start piecing together the parts to help investigators assess the damage and definitively establish the cause.

Officials denied a report by Dutch public broadcaster NOS that police and prosecutors were being frustrated by the AIVD intelligence service withholding information.

Sources within the inquiry team were concerned about a lack of political will to bring the perpetrators to justice, NOS said.