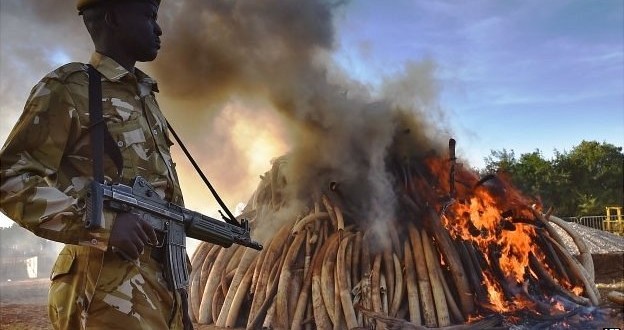 Kenyan President Uhuru Kenyatta has set fire to 15 tonnes of elephant ivory as part of the East African nation’s efforts to curb poaching.

The ivory, with a black market value of $30m (£19.4m), is the largest consignment to be destroyed in Kenya.

“Many of these tusks belonged to elephants which were wantonly slaughtered by criminals,” he said at the ceremony in Nairobi National Park.

Elephant ivory is often smuggled to Asia for use in ornaments.

The tusks came from many hundreds of elephants

Rhinos are also poached for their horns for use in traditional medicine.

Conservationists have warned that elephants could be wiped out in some parts of Africa in the next few years.

“Twenty-five years after the historic banning of the ivory trade, demand from the emerging markets once again threatens Africa’s elephants and rhinos,” President Kenyatta said.

On frontline with Kenya’s anti-poaching force

The burning of the ivory was to show that wildlife trophies must be put “beyond economic use”, he said.

“We want future generations of Kenyans, Africans and indeed the entire world to experience the majesty and beauty of these magnificent animals.

“Poachers and their enablers will not have the last word in Kenya.”

Kenya is home to an estimated 30,000 elephants

Mr Kenyatta promised that his government would destroy the country’s entire stockpile of ivory – thought to be another 115 tonnes – by the end of the year.

“We are committed to combating the menace robustly and persistently until we dismantle the entire vile economy,” the president said, adding that Interpol’s new regional office on environmental crime in Kenya was a significant boost in the battle.

Last month, China imposed a one-year ban on the import of ivory, amid criticism that demand from its consumers was fuelling poaching in Africa.