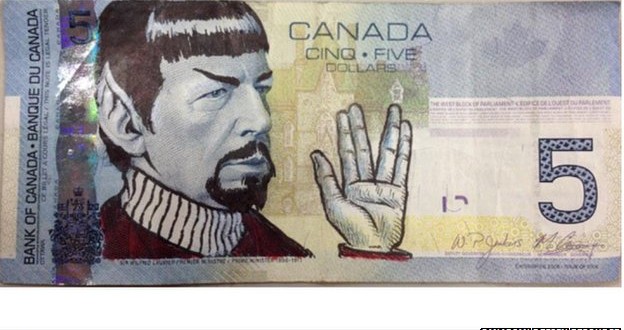 The Bank of Canada has said that it is not illegal to deface or mutilate banknotes.

The announcement was made after actor Leonard Nimoy’s death last week set off a craze of marking-up banknotes.

Bank spokeswoman Josianne Menard did not encourage the practice, however.

“The Bank of Canada feels that writing and markings on bank notes are inappropriate as they are a symbol of our country and a source of national pride,” Menard told the Canadian Broadcasting Corporation in an email.

The spokeswoman also said disfigured bills may not circulate for as long and risk being rejected by retailers.

There are laws, however, that prohibit reproducing both sides of a bill electronically.

Meanwhile Nimoy fans in other countries bemoaned the lack of diverse-looking former rulers. One Twitter user in India tweeted a picture of a defaced X rupee note with the words, “”That moment you try #spocking Gandhi and turns our he ain’t a[s] cool.”

While another Canadian pointed out the alternatives available to Americans posting the word: “Of course our US cousins don’t have the benefit of Laurier on their 5s, so they’ve developed this #spocking variant,” followed by a picture of Bill Murray drawn on a $5 bill.