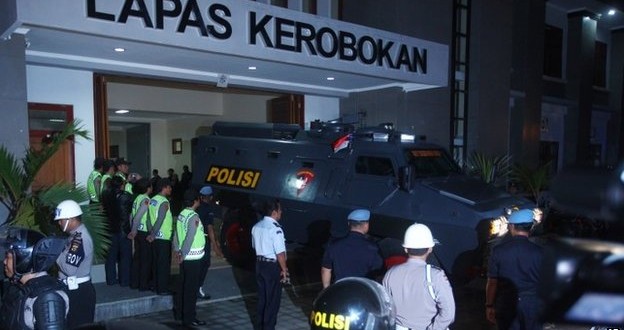 The ringleaders of the “Bali Nine” Australian drug gang are being transferred from Bali to another Indonesian island to be executed.

Andrew Chan and Myuran Sukumaran are among nine foreigners expected to face a firing squad in the coming days.

Australia has pressed Indonesia not to go ahead, with Prime Minister Tony Abbott saying he was “revolted”.

The pair were convicted in 2005 after being caught attempting to smuggle heroin from Bali to Australia.

President Joko Widodo has said the drugs trade destroys lives in Indonesia and he will show no mercy to convicted dealers.

Chan and Sukumaran left Kerobokan jail in Bali in the early morning in armoured cars and are being transferred to Nusakambangan, the prison island where the executions are due to take place.

Chan’s brother Michael and Sukumaran’s mother Raji, who have visited the pair regularly, were seen talking with prison guards after the convoy left.

Australian media said they were refused a request to see the pair.

It is not clear when the executions will take place, but a formal announcement will be made by authorities 72 hours before.

There have been unprecedented levels of security for this transfer. Some media outlets have reported that members of Indonesia’s anti-terror unit Detachment 88 are also involved – highly unusual for the transfer of two drug convicts.

But that may be because of the unprecedented level of media interest in this case.

Chan and Sukumaran have had all their appeals and applications for clemency rejected by the Indonesian government, despite repeated representations on their behalf by the Australian government and human rights activists who say the two men have reformed.

Their planned executions have raised tensions between Australia and Indonesia, at a time when the two countries were just starting to repair ties after a spying incident.

Indonesian President Joko Widodo has said that no amount of foreign pressure will stop the executions from going ahead.

Speaking to ABC News on Wednesday, Mr Abbott said millions of Australians were feeling “sick in their stomachs at the thought of what’s likely to happen to these two men”.

He acknowledged that they had “committed a terrible crime”, but added: “We abhor the death penalty, which we think is beneath a country such as Indonesia.”

Chan and Sukumaran are being transferred with two other foreigners facing execution – a 45-year-old Nigerian man and a 30-year-old woman from Spain.

Indonesia’s Nusakambangan prison, where the executions are due to take place

Chan and Sukumaran’s relatives and supporters have pleaded for their lives to be spared, arguing that they have been rehabilitated while in jail.

Lawyers for the two men said they were still attempting to mount a legal challenge but Indonesia’s Attorney General Muhammad Prasetyo said on Monday that any legal appeals were no longer valid following the earlier rejection of clemency by President Widodo.

Brazil and France, whose citizens are also on death row in Indonesia, have expressed their unhappiness in recent weeks.

Paris has summoned the Indonesian envoy and Brazil’s president refused to accept the credentials of the new Indonesian ambassador.

If the executions go ahead, the nine foreigners and one Indonesian national would be the second group of drug offenders to be put to death since Mr Widodo came to power.

In January Indonesia executed six people, five of whom were foreigners, for drug offences.

The Netherlands and Brazil, whose citizens were executed, recalled their ambassadors to Indonesia in response, saying this severely affected diplomatic relations.