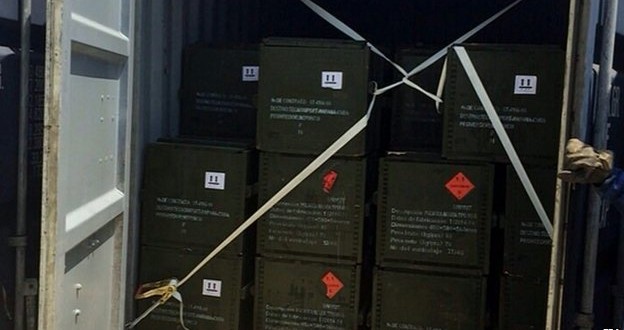 Colombian officials say they have detained the captain of a China-flagged ship bound for Cuba for illegally carrying explosives and other arms.

The attorney general’s office said the ship was stopped over the weekend in the Caribbean port of Cartagena.

Officials said about 100 tons of gunpowder, almost three million detonators and some 3,000 cannon shells were found on board.

The ship’s records said it was carrying grain products.

“The documentation that the captain had in regards to the merchandise that was being transported did not correspond to what we found,” said Luiz Gonzalez, national director of the Colombian attorney general’s office.

He said the Chinese captain, Wu Hong, would be charged with weapons trafficking.

The ship was been impounded and searched for 48 hours before the order for the arrest of the captain was made.