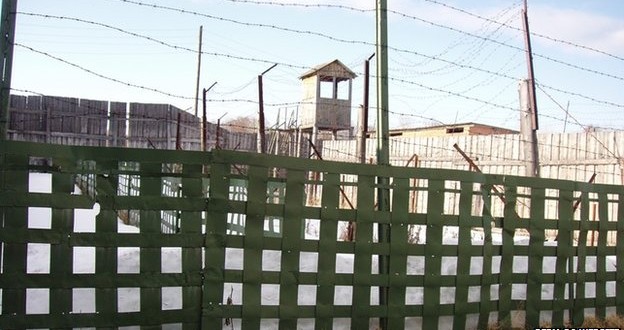 The director of a Russian museum at a Stalin-era prison camp says local officials have taken over the site and removed references to the Soviet dictator’s crimes.

Perm-36, in Russia’s Ural mountains, is the only surviving camp with buildings dating back to the Stalinist terror.

A non-governmental group has been managing the museum, but is disbanding after arguments with Perm officials.

Millions of Soviet citizens were sent to labour camps in the notorious Gulag system, or shot, during Joseph Stalin’s hardline communist rule. The worst repressions took place in the 1930s.

Portraits of Stalin – taboo after the scale of his crimes was revealed – have become more common since the collapse of the Soviet Union in 1991. Surveys indicate that many Russians now regard Stalin as a hero.

‘Not about political prisoners’

Speaking to the BBC by phone, Mr Shmyrov said the local authorities had decided to put their people in place at the camp.

“The memorial won’t disappear, but the museum has been taken over by other people appointed by the new authorities, who have totally changed the content. Now it’s a museum about the camp system, but not about political prisoners. They don’t talk about the repressions or about Stalin.”

Last year the Perm authorities cut off the site’s water and electricity, complaining of unpaid bills.

Mr Shmyrov said the takeover started in 2013 and triggered protests by thousands of people.

“It will lose its significance,” he said, complaining that now “the museum will be quite different”.

Up to 3,000 political prisoners were housed there under Stalin, and about 1,000 when Leonid Brezhnev was Soviet leader in the 1970s, he said.

The prisoners included nationalists from Ukraine and the Baltic republics, and such nationalists are vilified in Russian state media today.

Mr Shmyrov said the takeover by the Perm authorities was less about a rehabilitation of Stalin than “connected with the political situation in the country”.

“We are already seeing the creation of a Stalinist-type state – enormous power is concentrated in the hands of one man,” he said.

Under President Vladimir Putin “there is no need now for repressions – the people have become obedient”, he said.

“The political system is returning to totalitarianism.”