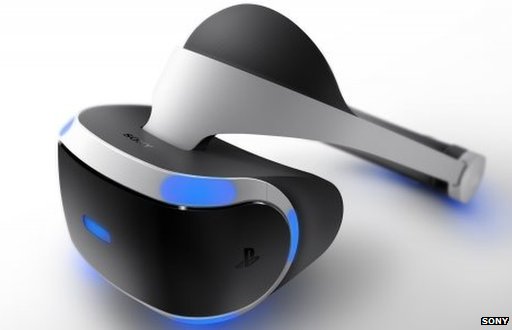 The new version of the Morpheus looks similar to the original, but has better components

Sony has revealed an upgraded version of its virtual reality helmet, which it says it plans to put on sale in 2016.

The new edition of Project Morpheus now features an OLED display, rather than an LCD one, letting it show more vibrant colours. That brings it in line with Facebook’s rival Oculus Rift.

It is also capable of showing graphics at 120 frames per second (fps).

That beats the figure given by HTC for its recently unveiled Vive virtual reality (VR) headset.

The frame rate is important as the higher the number, the smoother moving objects appear. It also reduces the risk of nausea.

HTC said on Sunday that its helmet provided a refresh rate of 90fps.

Oculus has not confirmed its specifications, but recent demonstrations of the recent Crescent Bay version of its kit have also been reported to run at 90fps.

Sony’s announcement is a surprise, because until now, the PlayStation console – which Morpheus depends on to play games – had not been thought to be able to render games at this rate.

However, speaking at the Game Developers Conference in San Francisco, PlayStation executive Shuhei Yoshida revealed that a software update would allow the machine to create an “in-between frame” to double its current maximum of 60fps.

“Higher frame rates are definitely important because they are going to translate into higher responsiveness of the gaming environment,” explained Brian Blau, an analyst at the Gartner tech consultancy who previously worked in the virtual reality industry.

Morpheus can be used with the PlayStations standard DualShock 4 controller

“That’s going to mean people who are wearing the device aren’t going to feel as sick. 120fps approaches the range where you don’t notice the changes in the graphics – they will be smooth and fluid.”

Other details revealed at GDC include:

Mr Yoshida said the current version was “near final”, suggesting there were further improvements to be made before it goes on sale, which is scheduled to happen within the first six months of 2016.

He added that more details would be unveiled at the E3 video games expo in June.

The release date is later than that of HTC’s Vive headset – a collaboration with video games publisher Valve – that is set to launch before the end of this year.

HTC’s kit is expected to be designed for games sold via Steam’s PC-focused Steam online marketplace, meaning it may not directly compete with Sony’s machine. PCs can generate higher quality moving images than the PS4 if fitted with special graphics cards.

Valve also released more details about how its VR system would work.

It said a tracking-system called Lighthouse would let users explore a virtual space and the objects within it from different angles by moving about in real life.

“In order to have a high quality VR experience, you need high-resolution, high-speed tracking,” said Valve’s Alan Yates in a statement released by the firm.

“Lighthouse gives us the ability to do this for an arbitrary number of targets at a low enough bill-of-materials cost that it can be incorporated into TVs, monitors, headsets, input devices, or mobile devices.”

The firm said it would allow manufacturers to build Lighthouse into their products without charging them a fee.

It also announced the Source 2 games engine – software used to create video games with 3D graphics – which it is making available to third-party developers.

The original version, which is 10 years old, was used to make games including Half-life 2, Portal and Titanfall.

Valve may provide more details about its VR platform later this week when selected GDC attendees will be among the first to try out the HTC Vive.

Oculus has yet to set a release date for its PC-connected virtual reality helmet.

However, Samsung already sells Oculus-branded VR kit that uses its smartphones as screens.

“There’s a lot of products coming to market, which is going to mean consumers get to experience it in a way they haven’t been able to do before: at home and in high quality.

“Here at GDC, there are a lot of developers who are interested in VR.

“But the big issue is, will the helmets be affordable or expensive. The early adopters will probably pick one up and pay whatever price is asked, but a higher price will limit sales for mainstream gamers.”