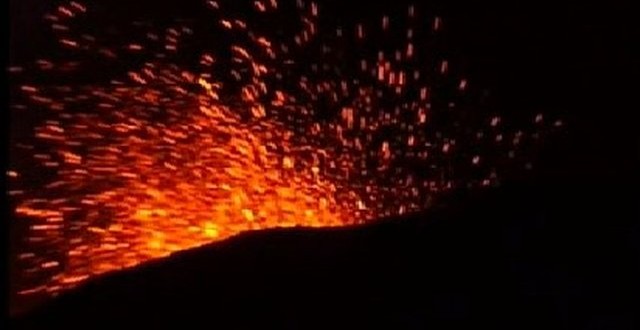 The Villarrica volcano in southern Chile erupted in the early hours of Tuesday morning, spewing ash and lava up to 1,000m (3,300ft) into the air.

More than 3,000 people have been evacuated from the volcano’s vicinity. The mayor of the nearby town of Pucon said residents had left “calmly”.

President Michelle Bachelet said she would travel to the area on Tuesday to assess the situation.

The 2840m-high Villarrica is an active volcano with a lava lake in its crater.

It is a popular destination for hikers. Hundreds climb the peak each summer to peer inside the crater.

The night-time eruption illuminated the sky around the volcano

According to Chile’s Ministry of Mining, its last major eruption was in 1985.

More than 100 people are thought to have died in mudflows on the slopes of the volcano during the 20th Century.

Chilean police said the towns of Pucon and Conaripe had been evacuated as a precaution.

Pucon Mayor Carlos Parra said that after 20 minutes, the volcano’s activity seemed to have calmed down again.

“There’s no ash, no lava flow, the volcano is totally passive at the moment,” he said.